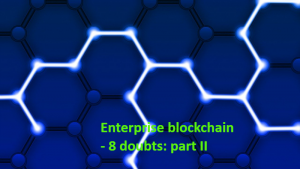 [Part I of ‘Enterprise blockchain adoption: 8 reasons to doubt’ may be found here]

#4 blockchain legal uncertainties, and how these may be increasing

Legal uncertainties are multiplying with distributed ledger technology. For example:

The first four of these are relatively straightforward to understand – though not to resolve. The last is more complex.

Placing provenance information on a blockchain, for example so that consumers can trace where what they are buying comes from, has it promoters. Think Food Trust or Blocksyte (for food, including olive oil), Provenance Proof (for gemstones) or the Responsible Sourcing Blockchain Network (for cobalt). Such initiatives demand accuracy when placing data onto a blockchain. If that data is not accurate then the risk is of building false assumptions on which consumers (and downstream producers) then depend.

Not convinced? That steak: are you sure it came from that specific tagged cow (most do not think of slaughterhouses as the ideal harbinger of accurate data)? That Extra Virgin Olive Oil: did it come from the field with the Arbequina or the Blanqueta cultivars of olive tree (q.v. note 1)? The cobalt in your EV’s battery: how can you be sure that 100% of the mineral in your car’s battery pack came out of a ‘mine’ which does not exploit child labour?

Each of these possesses potential legal issues which are not simple to solve – irrespective of blockchain. Indeed, introducing blockchain adoption may make legal solutions harder.

#5 Complexity is not dissipating

Many view decentralisation as blockchain’s raison d’être. Yet, as in political life, decentralisation possesses limitations. ‘At least’ existing centralised structures and services have the attractions of (appearing to) work.

In this context, as also discussed in #3 above, enterprises may consider a hybrid approach – like that espoused by Kadena. This seeks to combine the best aspects of centralised and decentralised systems. The problem with this is its inevitable complexity.

Complexity is reluctant to give up its hold. As observed in 2018, when Enterprise Times paraphrased Voltaire: we must not “let (enterprise blockchain) complexity be(come) the enemy of effective”.

Substantial blockchain networks store entire transaction histories. In the Bitcoin instance, in 2018, this exceeded 100GB. As of 2/2020 it has reached almost 260GB – and the Ethereum blockchain stands at >180GB.

These necessarily replicate across most, though not all, participating nodes. To store blockchain data, that data has to download and then update all the time. Even with improved network speeds, this can take hours, or days.

The alternative is not to store data on every network node. But this would:

The challenge is – the more transactions processed, the faster the blockchain expands. This can lead to the conclusion that a blockchain’s life span should have a limit, at least under current technology circumstances. Yet, if an enterprise blockchain is not to exist for ‘a long time’, is it worth the effort?

Note 1: full disclosure: the author has an interest in olive oil, having written a novel – Virginity Despoiled – involving corruption and the abuse of olive oil production…