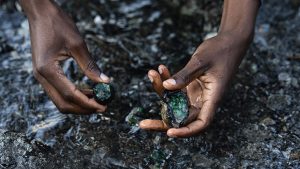 Provenance Proof has reached a significant moment in its move to provide transparency to the coloured gemstone market. It has successfully protected over 18kg of emeralds that were sold at the Gemfields November 2019 auction in Singapore. The emeralds all came from Gemfields mines in Zambia.

The emeralds were protected by two different technologies provided by Provenance Proof:

Raphael Gübelin, President of the House of Gübelin, explains: “Each technology works perfectly on its own, but a combination of both provides even more robust transparency.”

The demand for coloured gemstones is booming, especially in China. This is putting pressure on miners to increase their output to meet demand. It also increases the opportunities for illegal mining operations and the risk of conflict stones entering the retail market.

Gemstone mining in Africa has a poor reputation for conflict stones. Several governments and militia rely on illegal mining to provide funds. Little of that money goes to the wider population. Instead it is used to buy arms and support the lifestyles of those leading the mining operations.

The involvement of Gemfields in this announcement is, therefore, significant. It is the largest miner of emeralds in Zambia and has several other gemstone mining operations across the continent. By using the Emerald Paternity Test nano tags, it can demonstrate where all the gemstones have come from. Adrian Banks, Managing Director of Product & Sales at Gemfields, states: “Consumers are increasingly interested in the origin of their gems and how they can be responsibly mined to have a positive impact on the countries they are from.”

Transparency is likely to appeal to buyers who can now see the history of the gemstone they are buying. It may even provide a premium given that the history of the stones is also protected by the Provenance Proof Blockchain. For insurers, the benefit is that they also know the history of a stone which they will hope reduces the level of fraud and recycling of stolen gemstones.

For the Government of Zambia knowing what was bought and sold means it also knows what royalties it is due from Gemfields. This is more than just ensuring the correct taxes are paid. Transparency at this level also reduces the risk of corruption at a government level as sales and income are public.

In January 2018, the Gübelin Gem Lab announced a deal with blockchain registry experts Everledger. Blockchain experts Everledger had already demonstrated success with its diamond registry solution. Several diamond exchanges and insurers were using it to trace the origins and ownership of high value diamonds.

The goal was to create a similar solution for the much wider and more complex market of coloured gemstones. To make this an industry solution. the Gübelin Gem Lab created Provenance Proof. The complexity of creating the solution, including technologies such as the Emerald Paternity Test, meant that the Provenance Proof Blockchain was officially announced in September 2018.

The Provenance Proof Blockchain was launched publicly at the AGTA Tucson gem show in February 2019. Since then, the focus has been on getting miners, dealers and the wider jewelry industry to adopt and understand it.

Provenance Proof has now reached a key moment in time. The Gemfields Auction in November is the first large scale use of the Provenance Proof technology. There will be a lot of attention on what happens next. Will there be pull through from the buyers for traceable gemstones? The success of the Everledger diamond registry suggests there will. Insurers offering lower premiums due to the ability to track and trace gemstones will certainly help.

Of particular importance is that this auction took place in Singapore. The organisation that worked with Everledger on the diamond registry is the Singapore Diamond Investment Exchange (SDiX). It is entirely possible that the success of SDiX increased the interest of Gemfields in using Provenance Proof. Will this be enough to pull in the other major players in the gemstone market from miners to dealers?

Anything that improves the transparency in the often murky world of gemstone mining is to be welcomed. It is more than just reducing the loss of royalties and tax revenues to poorer countries. Many of those illegal mining operations are dangerous and in conflict zones. There is a significant human rights benefit here for those that live in those areas if this use of transparency and blockchain can become all pervasive across the gemstone market.

But for all of this to really work, it has to be something that is marketed. Ask the average buyer in the street about the diamond registry and they are blank. Walk into high street jewellers in the UK and US and ask to see diamonds that are on the diamond registry and most have no clue what you are talking about. Can Provenance Proof change that for the coloured gemstone market?

For the very high end buyers who are shopping at the House of Gübelin, this is a selling point, especially if the major insurers are on board. What is needed now is for more coloured gemstones, not just emeralds, to be sold in bulk with a tracer and registered on the Provenance Proof Blockchain. At that point, a promotional campaign, backed by insurers and the major jewellers should help raise interest among the wider buying public. If that doesn’t happen, this is a great technology solution but one that demonstrates what is possible rather than one that changes the way gemstones are sold, bought and traded.