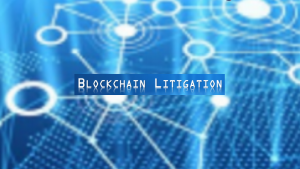 Lawyers Murphy & McGonigle, in their second Blockchain Litigation Year in Review Report, indicate their database shows the Southern District of New York (SDNY) leads the way. When it comes to litigation in the still evolving space of blockchain, New York looks as if it leads the way (no great surprise there).

“As many companies are investing in or exploring innovative uses of blockchain, this Report helps quantify risk areas and provide a monitor for the litigation climate for blockchain along with current trends,” said Daniel Payne, a member of the firm’s FinTech & Blockchain Practice and architect of the firm’s Blockchain Litigation Database.

“There is no shortage of speculation on the potential of blockchain, and this report identifies potential pitfalls and red flags for those investing or sponsoring blockchain initiatives.”

According to the Report, based on data collected and analyzed from Murphy & McGonigle’s proprietary Blockchain Litigation database, five key trends emerged in 2019. Each merits attention from those operating in or considering the blockchain space:

Rulings will affect the blockchain industry

Even when investors lose substantial cryptocurrency investments, courts are scrutinising fraud claims for allegations that satisfy heightened pleading standards. For example, the Courts:

Separately, courts may take a broad view of jurisdiction, pulling in crypto companies which operate largely outside the US:

Traditional white papers and SAFT disclaimers may not be sufficient to defend against securities litigation. In one case the defendants argued that the plaintiff did not allege actionable misstatements under securities laws because:

Murphy & McGonigle is a  FinTech & Blockchain legal practice which advises clients on the legal and regulatory financial services regimes applicable to digital financial instruments, including those  relating to:

For 2020 Murphy & McGonigle project the number of blockchain cases will continue to rise, perhaps even reaching 2018. This may occur even without a new wave of regulatory enforcement actions.

In the absence of new, clear guidance from the SEC or Congress, Murphy & McGonigle suggest that token issuers will be tempted to straddle the utility/security token path. The firm believes this risks enforcement actions.

In addition, many of the Cases filed in recent years will come to fruition. The probability is that these will deliver significant decisions in different jurisdictions. Many will likely conflict which could, per Murphy & McGonigle, lead to louder calls for increased legislative and regulatory guidance.