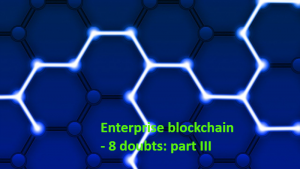 [Parts I and II of ‘Enterprise blockchain adoption: 8 reasons to doubt’ may be found here and here]

#7 Data immutability and indestructability are illusions

Mining does not provide network security. Many blockchain proponents (especially of Bitcoin and other cryptocurrencies) argue that mining maintains the stability and security of a blockchain. If there are enough miners operating independently this will be true. However, miners can combine. If they do and they assemble >50% of mining power, they can rewrite or alter blockchain records (history). If this is possible, the security of data disappears.

While some will argue there is no obvious economic attraction for miners to shoot themselves in their economic feet, this can change if:

The mere possibility that outsiders can ‘interfere’ with blockchain indestructability should give enterprises a wholesome meal for thought. To put this into one perspective, consider the business as well as societal implications if GPS/Glonass/Galileo timing signals became unreliable and dependable synchronisation disappeared. Blockchain unreliability would be little different.

#8 When e-currencies, cryptocurrencies and distributed ledger mix, confusion can follow.

E-currencies, cryptocurrencies (including digital tokens and their ilk) and blockchain are easy to confuse. After all the Bitcoin and Ethereum cryptocurrencies depend on decentralised digital ledger technology to function. Separating out the elements matters for clarity.

Unfortunately, the plethora of cryptocurrency (and digital token) offerings plus talk about national e-currencies (also known as Central Bank Digital Currency or CBDC) often obscures the fact that the digital ledger which underpins these is conceptually distinct from the *currency aspect (not dissimilar to how an accounting ledger is separate from the currency in which it records transactions).

As Reuters summarises: “CBDCs are traditional money, but in digital form; issued and governed by a country’s central bank. By contrast, cryptocurrencies like (B)itcoin are produced by solving complex maths puzzles, and governed by disparate online communities instead of a centralised body.

“The common denominator is that both cryptocurrencies and CBDCs, to a varying degree, are based on blockchain technology, a digital ledger that allows transactions to be recorded and accessed in real time by multiple parties. …unlike central bank money, both traditional and digital, the value of cryptocurrencies is determined entirely by the market, and not influenced by factors such as monetary policy or trade surpluses.”

To sort out what applies:

There are negative and teething aspects to blockchain, as with most emerging technologies. The objective here is not, however, to discredit blockchain (or digital ledger technology) for enterprises. Rather the purpose, as it was in 2018, is to provide enterprises with a range of considerations (and any additional ones not covered) which warrant assessment before acting.

Despite the disadvantages, enterprise blockchain has advantages. Many of these are unique. Enterprises must balance the advantages against the disadvantages. As in 2018, the ‘test’ for all blockchain implementations lies in resolving the inherent contradiction between centralised and decentralized, between cryptocurrencies and digital ledgers. Unfortunately, achieving these remains, in practical terms, as difficult as being half-pregnant.

As the economist Nouriel Roubini wrote: “As for the underlying blockchain technology, there are still massive obstacles standing in its way, even if it has more potential than cryptocurrencies. Chief among them is that it lacks the kind of basic common and universal protocols that made the Internet universally accessible (TCP-IP, HTML, and so forth).

“More fundamentally, its promise of decentralized transactions with no intermediary authority amounts to an untested, Utopian pipedream. No wonder blockchain is ranked close to the peak of the hype cycle of technologies with inflated expectations.”

That was true in 2018. It remains largely true in early 2020. It may not be true in 2025 – because the inherent concept behind distributed ledgers is attractive in its potential to simplify and thereby enable business model innovation.