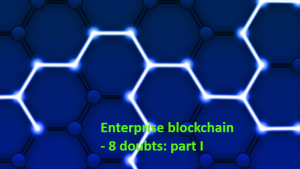 In October 2018, Enterprise Times gathered 10 reasons why enterprises might lack enthusiasm about introducing blockchain or distributed ledger technology (also known as DLT). 18 months later Enterprise Times offers a refined (in the sense of developed over time) list of reasons which continue to fuel enterprise doubts.

These revised 8 reasons – which do not suggest all the reasons from the original list have disappeared – should not destroy faith in the fundamental positives associated with distributed ledgers. Rather, each one should encourage thought-with-analysis because their applicability will vary depending on the enterprise.

These 8 reasons to doubt (in no particular order) include:

#1 The potential dangers of permissioned blockchains

The contrast with banking, even that embracing traditional trade finance, is instructive. Banks might know the financial details of (say) an international transaction (via the letter or credit documentation). In a supply chain, or trade finance permissioned blockchain, there will be far more detail – from bills of materials to applicable tariffs to customs declarations to shipping information and even rules of origin data which satisfy the receiver country’s import requirements. In other words, hyper-detailed – with competitive-sensitive – data will exist about proprietary products in systems not controlled by the originating (selling) enterprise. This is a risk aspect rarely weighed when assessing the benefits of permissioned blockchains.

To be fair, there is much work on minimizing this risk, not least with zero knowledge proofs (aka ZKPs), as one possible remedy. This would prevent those not party to a transaction from seeing the details of transactions. Nevertheless, enterprises need to be aware, at least until the risk level becomes acceptable.

The way in which permissionless blockchains must operate – as in the case of Bitcoin – demands a particular approach and the calculation of some form of consensus (mining),which can be energy intensive (Digiconomist estimates this at “>77TwH for Bitcoin in early 2020 and reckons that 1 Bitcoin transaction consumes the equivalent energy of >770,000 Visa transactions”).

Put another way: “there is no paralleling, no synergy, and no mutual assistance. There is only instant, millionfold duplication.” This is the opposite of efficient. While distributed and ‘sort-of-scalable’, permissionless blockchains do not have the control and direction that permissioned blockchains possess.

When compared, classic banking (and other enterprise-relevant) technologies are more scalable than blockchain – and offer more control. That said, the attraction of permissionless is that lack of control.

To over-simplify, there are at least three categories, or groupings, where blockchain integration needs consideration (and potentially rejection). Just describing the theoretical combinations embraces the difficulties, of integration between:

None of these integration models is, today, straightforward. Yet most enterprises will need one or more combination of the above.

The idea – that ‘blockchain will whole scale replace information systems that exist today’ – is for the birds, for another couple of decades at a minimum. In the integration arena, much needs resolution. Dependable developments are coming slowly.