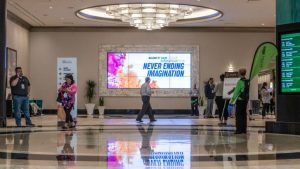 Sage had also just released Sage People Winter 20 People and ET asked Burrin why they changed their naming convention from ships names to a season and year. He revealed that doing so might be the best way for all companies despite the whimsical and fun names that startups may want to use. Workday recently changed their naming convention for probably a similar reason.

At Intacct Advantage the company announced the integration between Sage People and Sage Intacct. With an audience of Finance leaders not much was said about the benefits to HR. Kathy Lord explains these. She replied: “This will save a significant amount of time for the HR team.” It will also help them to make better decisions about attracting and retaining employees. The integration also assist compensation reviews and allowing HR leaders to understand the impact of any changes in a holistic manner.

Lord also discussed gender diversity. Notably on how women need to take advantage of and build networking groups for the future. Technology is key to delivering this, but it is very much a work not quite in progress.

She talks about how Sage is building a diverse leadership team in the future. She commented: “It is inherent up on us to help lift up another person whether that is a woman or male in order to help grow that next leader pool and make sure it is diverse.”

To hear what else Lord and Burrin had to say, listen to the podcast

Obtain it, for Android devices from play.google.com/music/podcasts

Use the Enterprise Times page on Stitcher

Use the Enterprise Times page on Podchaser

Listen to the Enterprise Times channel on Soundcloud

Listen to the podcast (below) or download the podcast to your local device and then listen there.

Securing Active Directory continues to be a challenge

Is your data compliance ready?

How digitization is impacting the payments industry