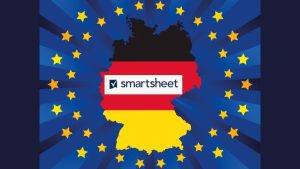 Smartsheet has announced Smartsheet Regions. There are now two regions, the US and a new EU region. The new EU region is hosted in Frankfurt, Germany, with a backup facility in Eire, still within the EU. It will enable organisations to control where their data resides and ensure regional compliance, privacy, and governance requirements. Smartsheet intends to add more regions in the next year, one assumes in APAC and possible the UK. However, it did not mention where.

Mark Mader, CEO of Smartsheet, commented, “We have customers all over the world, and we want to give them more control over where their data is stored so they can more easily comply with local data protection laws and regulations. With Smartsheet Regions, customers can unlock the potential to build and scale work solutions where their data needs to be.”

With the new region hosted in Germany, this will also enable Smartsheet to focus on the German market, which sometimes prefers its data hosted within the borders of Germany, not just the EU.

To support further growth in the region, Smartsheet has also signed a new partnership with Bechtle AG, a leading IT consulting company with 80 offices in 14 countries within Europe, mainly in the DACH region. Bechtle is a Gold Microsoft partner, and Smartsheet is the first work management solution vendor it has partnered with. However, as of publication, there is no mention of Smartsheet on the Bechtle website. Bechtle joins a growing list of partners in DACH, including AMX, Nanga Systems, ON-MC, and Star Cooperation.

Michael Backfisch, team lead of software product management infrastructure at Bechtle, commented, “Increasingly more companies are looking to drive digital transformation initiatives so they can become more agile and better serve their customers. With Smartsheet’s enterprise-grade work management platform, we can help our customers transform their processes and achieve more, so we’re very excited to offer their platform to our channel community.”

Smartsheet also revealed that it would expand its team in Germany. However, it seems to be hiring in London rather than opening an office in Germany at this stage of growth. There are 14 open positions in London, of which two specifically require a German speaker.

Smartsheet now has several open positions in Munich. This might indicate that it is now opening an office there. It is not currently listed as having a presence on the contact page.

Europe is important to Smartsheet. As Mader noted in a recent interview, it would primarily be through partners. However, with two partners, one with a significant local presence and a German data centre, how long will it be before Mader decides to open an office there? While the presence in the UK will remain, having an office within the European Union will also offer benefits.