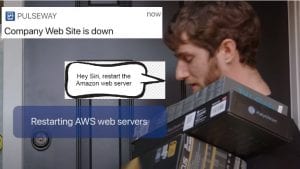 Pulseway has again improved the capability of its mobile-first, cloud-first remote monitoring and management solution. This time it has added Siri Shortcuts. Enterprise Times spoke with Marius Mihalec, Founder and CEO of Pulseway, about the innovation.

Siri Shortcuts will enable IT technicians to initiate actions using voice commands on Apple devices supporting Siri. In a video, different IT Technicians initiate a server reboot, restart an exchange service or initiate critical patching whilst performing other tasks. The latter is something that Mihalec used himself for the company servers during testing. It means that if they receive an alert via a phone, they can quickly take rectification actions.

Each shortcut needs to be pre-programmed, but it doesn’t have to relate to the task at hand. This is both good and bad news for IT technicians. It means that they can create any number of commands, but they had best create a protocol for themselves if working in an MSP with multiple clients.

Siri will ask to confirm the action before connecting to Pulseway to initiate it. This is vital as Siri can have trouble understanding similar commands at times, especially with background noise. Mihalec acknowledged that there might be a sensible limit to how many voice commands currently, using the analogy of a desktop of shortcuts.

This is also the first generation of commands. Enterprise Times asked when the system would interpret variables within commands, such as asking for an Exchange server for a specific customer is restarted.

Mihalex replied, “Fairly soon, we’re working on the next version where you can say that on non-destructive commands. Like what the CPU usage of an Exchange Service is. Technically it’s possible, and we’re implementing it. There is some in the next version for read-only commands.”

When will that be available?

“About a month or two. We are also extending these voice commands, which proved to be extremely popular with our customer base, to our web application. So you’ll be able to perform some searches with them like show me all the Exchange servers that need a patch applied, right.”

Mihalec commented: “We’re working on Google Assistant on the Android phone. There’s a bit more work to be done there to support it. It’s in research. I would say three months, maybe.”

In an insight into how Pulseway develops these apps, Mihalec revealed that the delay is because the Gooogle Assistant requires an app. Mihalec believes this is cumbersome as the user would need to open the app. He wants to get it to the same level as Siri, where the user can just talk to the device when they need to.

What prompted this update?

“Users mainly. Pretty much everything we do when it comes to improvements is coming in from our customers. We’re seeing about 94% of our MSPs are using the mobile app weekly. That’s a huge coverage when it comes to their usage patterns. We have seen 25-26% growth in mobile usage by our customers in the last 24 months.

“We talk to customers, and they’re saying, I’m mainly on the day to day, between locations, the mobile app is the one I go to first. The web application is as powerful but with this whole mobility aspect into it, every improvement that we can add to make their life more efficient. We tend to prioritise that.”

Even as a first-generation solution, it is easy to how this update can improve IT Technicians’ lives on the move. Mihalec commented: “If you’re a Pulseway and Apple user, your voice just got way more powerful. Our integration enables IT admins to resolve critical IT issues effortlessly, regardless of their location or situation. Without having to press a single button.

“Remote work is here to stay, and that means IT teams need to be more agile in the ways they support their clients and businesses. With Siri Shortcuts for Pulseway, you get the power of the world’s leading mobile RMM solution combined with intuitive voice control that makes IT management simple and efficient.”

While the solution is not yet scalable, it is easy to see how it could be. The methodology that Stu Templeton, Head of UK, suggested in a recent podcast is an example. Slack has a channel for every customer, with a defined channel name. Once Pulseway combines its workflow solution this will be a very powerful voice-enabled solution. For small MSPs especially, this could prove especially useful.