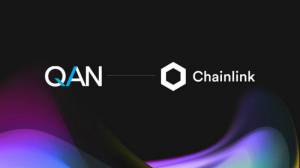 Johann Polecsak, CTO and co-founder of QANplatform commented on the integration: “I believe that giving developers the ability to build efficient smart contracts in a timely manner is a necessary step in order to reach the desired goal of mass adoption. We can only achieve that through real-world integration and co-existence with platforms that people already use. Thanks to Chainlink’s oracle solutions, we are able to do that with QAN. Alongside our multilingual smart contracts, developers possess everything they need in order to achieve adoption.”

While the QANplatform offers many security properties which make for long-term viability, it lacks (like other blockchain platforms) the ability to interact with data and systems that are not on the QAN blockchain. The challenge is that blockchains on their own only perform calculations on data stored within their networks while still maintaining security.

This problem is a major roadblock for blockchain development. Most smart contracts need to interact with external resources if they are to offer value. Smart contracts are significant because they can provide the ability to execute tamper-proof digital agreements which are considered highly secure and highly reliable. But, in order to maintain a contract’s overall reliability, the inputs and outputs that the contract relies on also need to be secure.

Given that trusted data sources exist on non-blockchain systems, there needs to be a way to access these in ways at least as secure as the blockchain itself. This is known as the ‘oracle problem’. An oracle is, therefore, a digital agent employed by a smart contract to retrieve and/or connect it to data and systems outside its native blockchain (off-chain).

Chainlink provides an oracle solution for a blockchain ecosystem. In this context, Chainlink is a decentralised oracle network which enables smart contracts securely to access:

Chainlink takes this further by adding decentralised security to the oracle mechanism triggering a smart contract. Through Chainlink, developers can protect against a centralised oracle becoming a single point of failure. It does this by:

The Chainlink approach can also protect against one data source being the single source of truth. This happens by gathering data from multiple sources and aggregating these together.

By adding Chainlink’s oracle solution to the QANplatform, QAN developers will be able to build more complex smart contract designs.

Some of the potential use cases QAN considers as having potential, once integration of the Chainlink has happened, include:

QANplatform is a quantum-resistant blockchain platform. It uses lattice-based cryptography to deliver resilience against the types of quantum attacks expected to become possible within the next five years (and which, it argues, all major crypto networks are vulnerable to).

Chainlink, via its decentralised oracle network, enables smart contracts to connect to off-chain data feeds as well as web APIs and traditional bank payment mechanisms. By combining the QAN platform and Chainlink expands their market possibilities, and attractions to developers. As important, smart contracts on a blockchain gain resistance to the likely quantum threat (to cryptography in general) coming in the future.