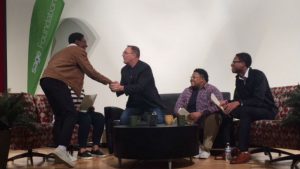 Sage Foundation has launched its FutureMakers initiative in the US for the first time. It partnered with 3DE, a non-profit created by Junior Achievement to deliver AI workshops at Banneker High School in Atlanta. The first week long workshop has just completed with more than 200 students attending. Its aim was to deliver AI skills to enable students to work on a societal challenge within their community.

Ron McMurtrie, CMO, Sage who attended the event and was interviewed by the students commented: “FutureMakers is a ground-breaking program designed to inspire young people to step up and take their place in emerging tech. Bringing it to Banneker High School in our hometown Atlanta is a great opportunity to have a positive impact on our local community. As a technology company, innovation is at the core of what we do, and we see the power and future potential of AI first-hand in our industry. We want to empower the next generation to use their skills and creativity to think about a career in technology, and ultimately solve the world’s problems with the AI they learn to create.”

The challenges the students focused on tied back to the United Nation’s 17 Sustainability Goals. Teams were grouped together based on which goals they wanted to tackle. Examples included:

Mid last year Steve Hare, CEO announced a renewed investment into the FutureMakers workshops. First launched in 2018 its saw events held in Newcastle, Manchester, Reading, London and Dublin. The program has now gone international with events in Cape Town, South Africa in September 2019. It held an event in Barcelona, Spain during December 2019 and now the US. It will also launch in France, though the Sage Foundation does not yet appear to have a partner there.

The US students were taught skills in a series of two hour workshops over a week. The content of which was designed by Kriti Sharma, Founder of AI for Good UK and Advisor to the United Nations Technology Innovation Lab. She was VP Artificial Intelligence at Sage before leaving in April 2019. The curriculum includes:

Dr. Valencia Bradshaw, Banneker High School STEM Program Director commented: “I can’t over-state the value of what students achieve through FutureMakers. In a short timeframe, young people who have never even coded are guided into developing an AI product that solves a problem they see in the world. The idea of applying ethical AI is taught by introducing our students to United Nations sustainable development goals. They learn that it is crucial for people from a diversity of backgrounds to contribute to the development of AI. They come to understand that the AI jobs of the future will require skills they already have – such as creativity, empathy and the ability to tell a story. What this ultimately does is empower our students to understand that they can play an important role in the future of this exciting sector.”

Sage partners with a third party to enable holding the sessions in a school setting. This was 3DE in the US, an organization that aims to engage in public-private partnerships and better prepare students for life outside of school. From its beginnings in Fulton County it piloted the new school model at Banneker High School and is now looking to spread the initiatives nationally. It has support from a range of corporates including Delta, SunTrust, The Home Depot, AT&T and Coca Cola. Although it delivered FutureMakers at the school, Sage is not a corporate partner, according to the 3DE website.

Niambi Sampson, 3DE Senior Vice President of Teaching and Learning commented: “Preparing our students for the AI jobs of the future provides an important addition to our curriculum, which is specifically designed to help them achieve world-class skills. With 90 percent of US students in public schools, we are passionate about showing what can be achieved when education reflects the real world and prepares students for life beyond the classroom walls.”

The goal of FutureMakers is to work with governments to insert workshops such as this into the school curriculum. It is to prepare students with knowledge of AI development as explained in this film. In the US it might seem sensible to extend the partnership with 3DE to other school partners across the nation.

Sage Foundation is seemingly expanding the FutureMakers initiative. It has yet to announce any events in 2020 within the UK but with the money Hare set aside, it should do so soon. This is a laudable initiative that while it does gain brand recognition by Sage does far more good for the students who will hopefully go on to have careers in technology.

There is a huge shortage of STEM students across several technology sectors. Initiatives such as FutureMakers will in time close that gap. However, this initiative is but a drop in the ocean. Governments, Schools and businesses need to combine resources to help educate students to deliver value as part of the future workforce. AI is seen by many as a game changer. While there are many people that will require skills in AI there is also the question of what the future workforce will actually do. Some jobs done today are likely to disappear. Future jobs will appear, it isn’t yet known what they will be. This was the same challenge faced by rural workers in industrial nineteenth century England when jobs in the countryside diminished and they found new work, and other challenges in the cities.