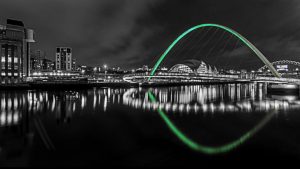 Sage has announced that it will invest £300 million in the UK by the end of 2020. Part of that investment will see it allocate £40 million to the North East of England over the next three years. It will move its headquarters across Newcastle  from North Park to Cobalt Business Park by the end of 2020. This does not signal a change of strategy and it will continue to work with local business leaders and government in the region.

Once the move is complete, Sage will have 2,000 of its global workforce of 13,000 working in the city. Sage is also intending to hire an additional 500 employees in product engineering, data science, support and sales across the UK.

The jobs are mainly located in Newcastle, Manchester, Reading and London as it further develops itself as a Cloud SaaS company. Steve Hare, CEO Sage, commented: “The UK’s tech sector is fast becoming a centre of global excellence, and Sage is particularly proud to be part of this, and to have such a significant home in the North East.

“Our colleagues are one of our main strengths, and I’m pleased that this investment will create a great experience for them and a fantastic environment for innovation– both are crucial to our vision of becoming a great SaaS company.”

It also announced that it will continue to grow its graduate and apprentice programs, bringing the number of hires up to 150. However, it did not make clear whether this is in addition to the 500 new hires or included within them.

Investing in the future

The company has also set aside £1.6 million to invest in training for its employees in leadership and innovation. Sage also announced that it will roll out another phase of the Future Makers workshops. It did these last in 2018 as a partnership between the Sage Foundation and TechNationUK. Events were held in Newcastle, Manchester, Reading, London and Dublin with the commitment that by October 2018 a select number of people would be offered work experience at a tech company. The focus last year was on building chatbots and leveraging AI tools to do so.

There is no indication yet on either the Sage Foundation or Tech Nation site when the next round will start as of writing this article. The assumption is that this may not now start until 2020.

Dr Liam Fox MP, Secretary of State for International Trade, commented: “The UK boasts one of the strongest tech industries in Europe, attracting more investment than any other European country and Sage is one of the UK’s best tech success stories. Their technology plays a vital role in enabling UK companies to do business each day and facilitates exports to markets overseas.

“My department is committed to attracting investment from across the globe to ensure that we remain the number one destination for investment in Europe. Sage’s investment shows a firm commitment to the UK and will help create high-quality jobs and drive prosperity into local communities in the North East.”

This is good news for the North East and the UK. While Sage was founded in the UK it is also a multinational company. With its acquisition of Sage Intacct, it may have considered expanding its presence in the US to increase its share of that major market. It may still invest there as well.

What will be interesting is whether Sage announces similar investments in other countries where it has a strong interest and market share. Will it invest in the US? Sage Intacct is its best performing cloud solution and continues to win new business. It is due to launch in both Australia and the UK later this year.

What is clear is that Sage, unlike some other companies, is not leaving the North East. Sabby Gill, UK & Ireland Managing Director, Sage commented: “Sage’s heart lies in the North East, the region is our spiritual home. Over the past three decades we’ve grown into a global technology leader, supporting over a million UK businesses directly or through our accountant partners, improving their productivity through digitisation.

“Sage continues to grow. Right now, we are recruiting for more than 200 open roles in the North East. It’s an exciting time for Sage, the North East and the UK.”