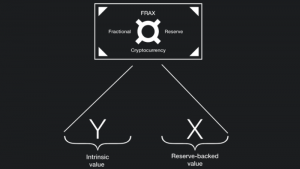 Frax, an aspiring algorithmic stablecoin on the blockchain, has announced Stephen Moore, Trump economic advisor and former Federal Reserve nominee, and Ralph Benko, former Reagan deputy general counsel, have joined the company’s executive team. Moore and Benko are joining Sam Kazemian, co-founder of Everipedia and Frax, to launch the fully decentralised global currency which aims to eliminate currency transaction costs while inhibiting currency manipulation (a hazard which is commonplace throughout the world). Frax will initially be launched on Ethereum and EOS Mainnet.

“Central banks will soon feel the competition from private currencies such as Frax. Currencies are intended to retain their value over time, but given the wild gyration in values of currencies and the struggle in many countries with hyperinflation, we need a global currency that has a stable value to benefit consumers, businesses and investors.”

The basis for Frax

Frax wishes to be an algorithmically-driven global currency that is:

All loans of Frax’s reserve assets are ‘executed’ on the blockchain. The rationale for this is to:

As a noncustodial stablecoin, users will then be able to trade reliably the token around the world without fear of:

Owners of Frax will, then, be able to send money around the world without worrying about remittances or fees. This would mean that money people send abroad will retain the same value today … and tomorrow.

The proponents of Frax describe the minting of Frax as occurring by depositing collateral into the Frax Reserve smart contract at a ratio determined by the system. This collateral ‘loans out’ through decentralised money markets.

In the future Frax says there will be updates which add more money markets.

The interest paid on loans accumulates in the Frax smart contracts. Frax uses this to stabilise the price to a target US$/Frax exchange rate. The theory is that, as the collateral and loans increase in size, the system can:

“It will empower owners to trade in a currency that they know will remain a stable unit of account and store of value and transparent and reliable across the globe. We aspire to make Frax what Bank of England governor Mark Carney called the ‘synthetic hegemonic currency’ of the future.”

Frax aims to become the world’s first fractional reserve-backed stablecoin. It hopes that recruiting a team of eminent experts in blockchain and global economic sectors will confer credibility.

This matters, especially in the light of what has happened to Facebook’s Libra – another candidate for world domination (aka an alternative stablecoin). Libra has lost many of its initial backers (Visa, Mastercard, eBay, Stripe and multiple others).

If aspirant stablecoins do not acquire sufficient credibility, especially with central banks, then their opportunities shrink (though do not necessarily disappear). Frax has moved to address such credibility challenges, though it may be some time before it knows whether it has succeeded.