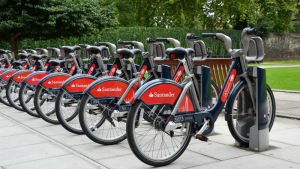 Banco Santander has revealed two more initiatives using blockchain. The first is a continuation of its blockchain initiatives in wholesale finance. The second is involvement  with the Madrid Ayuntamiento (city government) to use blockchain across its municipal transport system.

José García Cantera, CFO of Banco Santander, said: “Santander is at the forefront in the process of deep digital transformation of the financial sector and this ($20M bond) operation is an example. We want to take advantage of any technology that accelerates that process so that our clients progress and are faster and more efficient, and the blockchain is one of those technologies.”

The Bank has launched a $20M bond using blockchain technology. The bond will exist only on the blockchain, which the Bank argues is a first step for a possible secondary market for tokenised securities in the future. Santander Corporate and Investment Banking (CIB), the global division of the Bank (serving corporate and institutional clients) has led the bond issue which builds on work started in the Santander blockchain laboratory in 2016.

Banco Santander itself is the issuer of the bond. One of its Group’s units has bought it at market price. There is a quarterly coupon of 1.98%. Santander Securities Services acted as the ‘tokenisation agent’ as is the custodian of the encryption keys.

The Bank used Ethereum’s public blockchain. This enabled it to:

The cash used to complete the investment (delivery against payment on blockchain) and the quarterly coupon have also been tokenized. This means both have a digital representation on the blockchain.

By automating the bond, which expires in a year, the Bank has reduced the number of intermediaries participating in the processes associated with the bond. This has allowed a faster, more efficient and simpler operation. For the bond, the Bank received support from:

José María Linares, global head of Santander Corporate & Investment Banking, said: “Our clients are increasingly demanding the best ideas and technologies to help them in their capital raising efforts. This bond issued with blockchain puts Santander at the forefront of innovation in capital markets and demonstrates to our customers that we are the best partner to help them in their digital transformation.”

In Madrid, Banco Santander and startup Vottun will soon allow the city’s transport users to pay using a single unified digital payment system powered by blockchain. The idea is to create an application so that commuters in Madrid can access and pay for all forms of public transport (Metro, bus, tram, etc.)  within the city. The justification for the use of blockchain is it will enhance security. With a payment platform exploiting blockchain technology, Vottun is promising high levels of user data security.

This is part of an initiative called Madrid in Motion, begun by EMT (Madid’s transport entity). The objective is to digitise the city’s transit system and establish some form of order to the plethora of transport services provided under the EMT umbrella. These include:

Currently, most of these offer their own applications. Users must install and register themselves on each. This creates duplicated processes for the user and reduces the ability for the city’s management to operate as efficiently as it might. By unifying the system:

The latter is significant because it should create insights into congestion. In turn the city planning authorities should know where to improve transit options and/or redirect resources.

Vottun’s proposal – to unify Madrid’s transport application – won in a startup competition conducted by Madrid in Motion. The competition attracted some 300 proposals. During its presentation, Vottun allowed attendees to test product features such as facial recognition and biometric payment gateways.

“The user registration and validation system will be unique in all mobility services in Madrid because of the EMT app. This will facilitate the use of any mobility service to the citizen, and the payment in a simple and transparent way,” said Luis Carbajo, the CEO of Vottun.

Of the two initiatives, the first ‘repeats’ what has been undertaken by others, for example Daimler. The second is more interesting, and with a greater impact on a greater number of people. It is not, however, clear what the involvement of the Bank will be. Vottun seems to the lead participant.

NB: Full disclosure – from mid-October 2019 the author hopes to be resident in Madrid and should be able to find out, and comment on, whether the EMT/Vottun/Madrid in Motion initiative has substance.