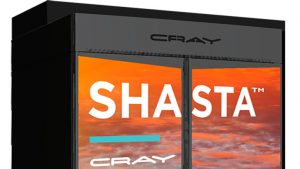 Supercomputer stalwart, Cray Inc, has been bought by Hewlett Packard Enterprise (HPE). The offer of £35 per share values Cray at $1.3 billion and is an all cash deal. The announcement saw the share price of Cray jump over 17% while HPE shares were barely moved.

The deal also reunites Cray with former owner SGI who HPE acquired for $275 million in November 2016.

HPE is buying Cray in order to boost its high performance computing (HPC) division. This market is expected to grow by at least 9% CAGR over the next five years. By adding Cray to its other product lines, Apollo and SGI, HPE believes it can become the number one supplier in this space. The move also boosts HPE’s credentials in terms of supercomputers. Cray has more entries in the Top 100 supercomputing list than any other vendor. When combined with HPE’s own solutions, the two become a dominant force. However, they are unlikely to challenge the top three at the moment.

In a webinar announcing the acquisition, Antonio Neri, President and Chief Executive Officer, HPE said: “This acquisition will position us to tackle the most data intensive workloads in the high growth segment of high performance computing. By combining our teams, our complimentary technology and our shared commitment to innovation we will have the opportunity to drive the next generation of high performance computing and play an important part in advancing the way people live and work.

“High performance computing has been and continues to be a strategic area for HPE and one where we have a clear differentiation. Over the years we have invested organically to build a strong portfolio and complete acquisitions, including SGI, to take advantage of the rapidly growing demand for powerful computing capabilities. We believe the explosion of data from artificial intelligence, machine learning and big data analytics and evolving customer needs for data intensive workloads will continue to drive a significant expansion in HPC.”

One of the reasons why Exascale is important is that it is believed to equal the processing power of the human brain. This is a Holy Grail moment in computer science. It is something that the Human Brain Project has been targeting since 2013. It would finally allow modelling of various brain diseases and drug behaviours. This would significantly boost fields such as Life Science and medicines.

Back to the more mundane world of HPC and this deal gives HPE its first serious foothold in Exascale computing and research. The key to the Cray Exascale computing offering is its Shasta supercomputer design. This was announced in 2018 and has already seen Cray win several deals with the US Government. Among those are three with the US Department of Energy. Two are described as Exascale supercomputer deals and based on both Shasta and Cray’s Slingshot technologies. They are:

Shasta is described as a data-centric supercomputer model rather than a compute-centric solution. It also supports multiple processor architectures in the same solution. This will enable it to run very different workloads at the same time such as machine learning and complex mathematical simulations. Like other supercomputers, it relies heavily on GPUs to deliver much of the parallel computing boost.

Not just about a processor architecture

This is not just about a better computing architecture. The Cray Slingshot technology is the latest generation of its ultra-low latency interconnect fabric. It allows the switches to be autonomous and not require tuning. In addition, they are designed to connect to any third-party Ethernet-based storage devices and networks. This will allow customers to get the data to the Shasta compute blades as fast as possible.

All of this plays into the reason that HPE wants Cray. The ability to manage multiple workloads using different processor architectures and ultra-low latency connectivity are key to Neri’s view of the demands on HPC networks. He called out artificial intelligence, machine learning and analytics as key markets for HPE’s HPC division.

Can Cray beat IBM to the exaFlop barrier?

There are also some significant bragging rights here for HPE. It might have customers using its supercomputer solutions but they are no longer high profile. The Cray acquisition makes it the leading supercomputer maker in the world, a market that is seemingly growing.

But can it knock IBM Summit or Sierra out of the top two slots or overtake China’s Sunway TaihuLight or Tianhe-2A supercomputers? That all depends on how fast it can get to the exaFlop point. At the moment, Cray’s best performing supercomputer is the Piz Daint. It has 387,872 cores that deliver a peak of 27,154TFlops. This is far below IBM Summit which has 2,397,824 cores and delivers up to 200,794TFlops. An exaFlop would represent a significant jump in performance that could kick start a supercomputer war between the top providers.

IBM is already claiming it has broken the exa operations per second barrier (exaops). During a genomic analysis in November 2018, using the Summit supercomputer, it reportedly hit 1.88 exaops. There are further claims that it could reach 3.3 exaops although IBM have not confirmed the latter number at time of writing.

If Cray delivers exaFlop performance at a consistent level rather than the occasional peak as part of the Aurora project it will could spark a new growth period for supercomputer. This is because Life Sciences, medicine and other related fields, including defence, all have projects waiting for this new scale of computing. However, Cray is not scheduled to deliver Aurora before 2021. By then, IBM will have released its Power10 processor which means IBM could pip Cray to that moment. It will be interesting to see how much money HPE will pour into this project in order to get bragging rights ahead of IBM.

The acquisition of Cray might not excite many people but it should. Cray has long been the most prolific supercomputer provider in the world. Its new Shasta architecture is very different to that of other providers. It could be what is required to not just deliver Exascale computing for a small number of use cases, but also be the solution that makes supercomputers cool again.

But developing these systems is not cheap. In its first quarter financial results Cray admitted that none of the US Exascale deals will be delivered before 2021. Despite having firm orders for the future, it could be that the costs it is incurring made the HPE deal seem attractive. Shareholders certainly think so. The question is who gets the most out of this deal – HPE or Cray. The answer is the former providing it can integrate Cray and is willing to provide the funds to continue to R&D. Over the last decade, integration of acquisitions has been a mixed bag for HPE. Can it do better this time?

For HPE, however, this is more than just about being a serious supercomputer player. It sees a bigger market for Cray inside its HPC as a Service cloud. While most see cloud computing as being about cheap resources that can scale out, both HPE and IBM know that there is still a place for big iron. IBM has been pushing its own cloud-based mainframe offerings for a while and HPE will want to take some of that Cray technology and move it downstream.

Is Cray the magic technology that will make HPE great again? Possibly. For now, however, it is watch and wait.

Is the next business network IoT based?