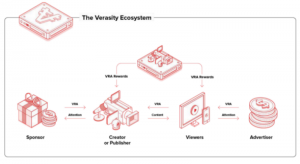 Verasity offers a blockchain-based platform which supports the infrastructure and tools for video publishers to serve rewarded video and loyalty programs to viewers. It has now integrated its Video Rewarded Player with Vimeo. In effect, this means publishers can serve up content over Vimeo while proffering rewards directly to viewers. With >1 million publishers and sites, 260 million users and 50 billion monthly views, Vimeo is a major video market player.

According to Verasity: “Building the future of online video is a big job which needs a solid foundation. That is why our team has been busy building integrations into the world’s largest online video platforms (OVPs). Currently, most content is watched on YouTube, which demonetises publishers and makes it harder for them to create and spend on great content. By rewarding viewers on a brand’s own digital property, viewers are incentivised to watch content that they enjoy on the publishers’ sites, allowing publishers to earn more and spend more on great content.”

The Verasity concept, platform and ecosystem

Many challenges exist with the online video space today. Verasity is building a new model where publishers and viewers transact directly on a blockchain. The attraction is this removes many of the needs for intermediaries.

The VRA token is a new medium of exchange which rewards video creation, and the viewing of videos. Anyone watching videos can earn VRA tokens. If they choose to watch adverts, or share videos with their network, they receive additional VRA tokens.

With this approach the Verasity platform gives publishers a selection of monetisation solutions to choose from, with Verasity’s mission being to help generate extra value from content for content creators. A key foundation is that all VRA transactions will store on a blockchain. In addition, to ensure transparency and integrity for its video distribution economy, Verasity is developing a proprietary ‘Proof of View’ technology: every video view will be securely tracked and stored on a blockchain. This is what will provide the security, flexibility and scale to support a new environment for:

By adding the Verasity Video Reward module, branded video content publishers (say an auto manufacturer) will be able to use Verasity’s VRA token to reach, reward, and retain viewers:

This combines engagement, audiences and revenues with publisher sites. If successful, Verasity’s attention-based model will establisih a VRA token economy with attractions for viewers, publishers and advertisers.

This stands in contrast to today’s environment where publishers of video content find that content plagued by:

At the same time viewers gift their privacy for a tiny return.

The VeraWallet, inside the Verasity video player, is the tool which enables publishers to reward viewers with VRA tokens. Such a rewards system encourages viewers to return and engage with publisher content. This, in turn, bolsters:

Again according to Verasity, its: “video rewarded player benefits both advertisers and brands. It is the first solution that is a win-win for all the parties in the online video ecosystem. Overall fill rates and click through rates increase by a factor of 4-5 and dramatically improve engagement.”

For success to arrive, the built-in economic mechanisms – which seek to  provide efficient recognition of value and incentives – must add value to both viewers and content providers. The ‘guarantee’ is that all payments within the Verasity platform scope will happen using the cryptographically secure digital utility payments (the VRA tokens). Conceptually this:

It sounds beguiling. The attractions of eliminating middlemen, which Verasity advances, is one of the most often touted benefits of blockchain. Yet Enterprise Times’ doubts about tokens, and whether they can play the part that their promoters desire, remain.