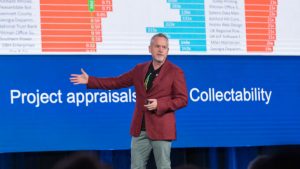 Sage Intacct announced two sets of new features at its annual conference this week. The first set is aimed at improving the life of finance teams that use its software. The new features deliver functionality that mid-market companies need to improve insights into their business and improve efficiency. The features include Sage Intacct Budgeting and Planning, Interactive Custom Report Writer and General Ledger Allocations

Aaron Harris, senior vice president and head of engineering and technology, Sage Intacct commented: “Our pace of innovation and history of rolling out industry-first products is unmatched in our field – and a major reason why customers enjoy working with Sage Intacct. We’ve consistently delivered quarterly releases for years, and unlike on-premise and some cloud solutions that slow over time, we’ve continued to introduce substantial, innovative offerings that make our customers successful. In fact, we’ve introduced more than 150 product enhancements in the past year alone, including a number of new products and some of the biggest quarterly releases in our history.”

It is not just within the product that Sage Intacct is gaining functionality. New solutions are appearing on its marketplace and existing ones improving. Floqast has introduced FloQast Flux Analysis module that integrates with Sage Intacct. Kimble Applications has introduced a connector for Sage Intacct and KeyedIn has improved its connector.

This solution was actually first launched in September (more details are in this article) but is generally available now. It came from the recent acquisition of one of Sage Intacct’s marketplace apps Budgeta.  Sage Intacct Budgeting and Planning is full functional cloud-based financial budgeting and planning solution. This is targeted at smaller organisations that find the increasing use of spreadsheets and collaboration, time consuming and error prone.

The internal developers in Sage Intacct have not been idle. While many organisations would look to add an external analytics solution to provide reporting Sage Intacct wanted an improved reporting solution that finance users could use without leaving the application. It will be available with the November release and as a new product will have a base price for the product.

The new report includes several features that enable users to build custom reports simply and easily. They include:

This is also not a one off solution.  Harris explained that the next generation is already in development. He promised embedded financial analytics. “A new highly interactive playground” where users “can play with data to find answers you are looking for. This analytics platform is working on live data. Therefore you have drill down [Capability] to your source data.”. No date was given for availability.

Another update he mentioned was the ability to draw in data from third party sources, this feature will be previewed in 2019.

There are sophisticated financial close solutions on the market such as Floqast and BlackLine, who were both present at Intacct Advantage. However, these are sometimes overkill for many companies. Sage Intacct has looked to address one of the most common pain points for finance teams during the close process, general ledger allocations.

The new functionality allows users to set up sophisticated allocations. These can be repeated at the press of a button at the end of future periods. This should reduce the time taken to close each period for some organisations significantly. As the system is automated it also reduces the likelihood of manual errors creeping into the process.

Harris commented on the allocations functionality saying: “It is not about just doing the math right, it will do it the right way”. Sage Intacct is allowing accountants to define the method used as part of the template. It will be available in the November release and again this is a new product and will be separately priced.

Harris also revealed that the company is developing a new bank reconciliation engine from the ground up. The objective, according to Harris is: “We want to get you in and out as fast as possible.” The new tool will deliver new sorting and filtering features and will allow customers to work on thousands and even tens of thousands of unmatched transactions. Users will be able to personalise their approach and this should save substantial time during close periods.

Leveraging the functionality from the wider Sage group it will also integrate with Sage Banking to access continuous feeds from hundred of banks across the globe. In time, the solution will also leverage AI to improve the matching and reduce the list of transactions. User will approve the matches rather than have to make them. The system will also include a better controls around separation of duties. A preview of the new solution is available shortly with the product due to become generally available in “early 2019” according to Harris.

Demonstrated on stage at Sage Intacct these new features were widely welcomed by the audience. In talking to customers at the event the custom reporting solution and bank reconciliation were clearly much anticipated favourites. The former evidenced by the over subscription of the 3 training courses original set up. A fourth was added and quickly filled up too. With 800 people trained at the event on the new solution, that indicates the appetite amongst the delegates for the new solution.