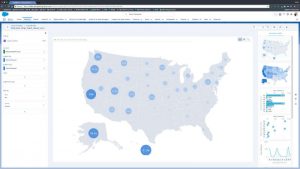 Conversational Queries supports predictive text, not just suggesting words but also whole phrases as the user types. For example “show me the revenue by .. “ might prompt Einstein to suggest sector, region or salesperson. It understands the data that each company holds and the likely phrases that are used. As a history of questions is built, it is possible to retrieve and reuse them, or share those questions and therefore insights with other users.

An early adopter, Rick Nania, Director of CRM Operations at Active International commented: “Conversational Queries is going to be a huge game-changer in the AI and BI space. Having the ability to ask questions and gain key insights into our data just by typing or speaking a few words is amazing. I was impressed with the ability to get suggestions just by typing in a few letters and seeing other possible questions to ask – no data scientists required.”

The conversational UI is built up using metadata rather than artificial intelligence according to an article in TechCrunch. This infers that this solution is different from the chatbots around and is more of a well defined predictive interface for users.

Moktali sees the new interface as simpler, she comments: “Traditionally, the process of creating charts has taken an average of 12 clicks and required a deeper understanding of chart building — how to create filters and what measures should go on each axis.”

Moktali talks about using a keyboard to type in the phrases. This seems almost a step back in time with many seeing a well designed UI simpler to use than a conversational interface. The difference comes if this new feature supports voice to text, which Moktali does not mention, although Nania does.

What conversational queries offers for users is a new way to engage with Einstein Analytics, originally launched as Wave analytics. This announcement is the latest of several around conversational AIs. Zoho CRM announced the availability of Zia voice, a conversational chatbot with its latest release. QuickBooks also launched QuickBooks Assistant in the UK recently. Conversational Queries is different though, rather than provide a wider chatbot interface this is merely a UI for Einstein Analytics. Both users and software vendors are able to embed this into their applications.