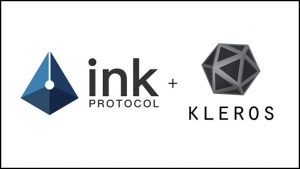 Ink Protocol and Kleros are to partner in a bid to resolve transaction disputes. Ink is a decentralised reputation and payments platform for peer-to-peer marketplaces.

Kleros has the Justice Protocol, a dispute resolution solution built on blockchain. The two companies are to join forces with Kleros acting as a mediator for any disputes on the Ink Protocol.

In a blog on the Ink Protocol website it says: “It’s inevitable: online transactions don’t always go according to plan. From missing deliveries to faulty goods, a number of issues can arise. In centralized marketplaces that’s where moderators step in — authorities paid by the company to examine disputes and act in one party’s favor. As a decentralized transaction protocol we’ve been exploring ways to not only match, but also to improve upon this system, and with Kleros we’ve found a great solution that plugs into our mediation system.”

Blockchain is being adopted in the supply chain for dispute resolution. Two years ago IBM built a blockchain solution for its global financing. It was targeted at reducing the 25,000 disputes it had with suppliers that was tying up $100 million. Within months of the solution going live IBM said that number of disputes had fallen to just a few thousand and freed up more than $75 million.

IBM has since applied that experience to projects with both Mahindra and Maersk. Dispute resolution has been built into the blockchain solutions it has developed for both customers.

The benefits of blockchain in supply chains is that at every step the quantity and quality of goods is known. There is no room for error when it comes to losses, breakages and theft. The Ink Protocol is built on the Ethereum blockchain platform. Surprisingly it doesn’t see this as enough to solve its dispute resolution process.

The difference here is that the entire shipping process is not covered by blockchain. For example, there appears to be no block attesting to the state of goods when they are delivered to the shipper. This is where Kleros comes in.

The blog goes on to say: “Kleros will act as a second layer of resolution — only used if a buyer and seller can’t come to a resolution among themselves. To use Kleros as the dispute mediator, we are building a smart contract that conforms to both to the Ink Protocol as well as their own standard. The dispute can be resolved before going to a mediator, but if the parties are unable to come to an agreement within a predetermined time, the transaction dispute is escalated to a mediator contract that will handle the Kleros integration.”

For large organisations that have mature supply chains, blockchain can be deployed at every step. This ensures that any issues can be refined down very quickly. In a consumer environment that is not the case. This is why Ink Protocol needs Kleros to provide that resolution dispute mechanism.

What is important about this is reality. There are too many blockchain-based offerings that assume blockchain solves all problems. Even with blockchain at every stage of the process there will still be disputes. Ink has identified a weakness and acted quickly to put in place a solution.

It will be interesting to see how much this deal raises the profile of Kleros. It has an interesting proposition but one that many may not be considering. If this deal with Ink delivers positive solutions quickly then other companies, irrespective of whether they use blockchain, may find themselves taking a closer look at Kleros’ Justice Protocol.