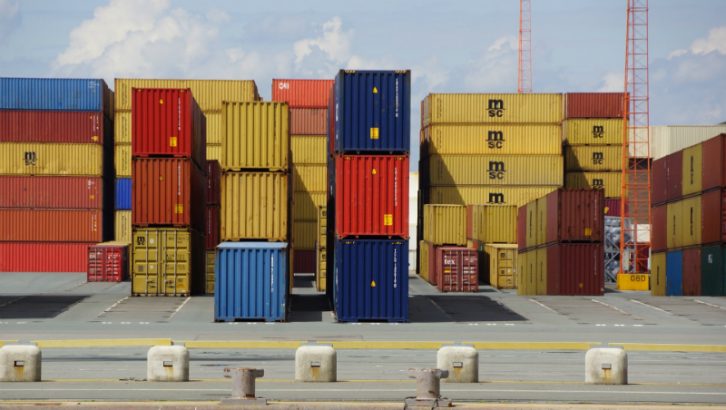 Europe’s second largest container port, Antwerp, is introducing a blockchain pilot which can release containers faster as well as more securely and efficiently. Working with start-up T-Mining, Antwerp uses blockchain technology to reflect the many processes which involve:

Securely digitised, every transaction and interaction is recorded as a block on the blockchain. This does not involve any central middleman removing the opportunity for fraud.

Nico Wauters, CEO of T-Mining said: “We aim to do something about this. We have developed a very secure solution. Currently, when we want to transfer a valuable object we generally make use of a trusted intermediary to carry out the transfer. For instance, when you want to sell a house the notary not only carries out all the paperwork but also ensures that the money lands safely in your bank account while the buyer receives full title to the property, without any unpleasant surprises for either party. But this intermediary naturally does not work for free, and furthermore the additional step causes extra delay.”

The problem the blockchain pilot tries to solve

Transporting a container from point A to point B frequently involves more than 30 different parties (see above) who may be located across continents, never mind countries. There are an average of 200 interactions between the parties which execute across multiple time zones. In addition, the five largest container ships can now carry over 20,000 TEU (twenty-foot equivalent units) containers.

Participants execute many of their interactions by e-mail, phone and even (still) by fax. Paperwork accounts for up to half of the cost of container transport. Each shipping company and container port have their own container management solution. A lot of money is spent each year maintaining the integration between these systems. There is also a need to integrate with the customs systems run by governments around the world. This adds up and becomes a complex problem which exposes containers to loss, thievery or misuse. What allows containers to be lost or used by criminal enterprises? The complexity of the paper chain. Blockchain offers an irrefutable digital footprint around each container.

A different way to assess this is to examine the Maersk interest in blockchain. Maersk, as one of the world’s top shipping companies, seeks competitive advantage. It wants to reduce the time taken to process containers and simplify the paper chain. Blockchain creates a secure system where access can be restricted to limit the risk of criminals identifying and targeting containers. Each containers blockchain ID is updated as it is moved. This means that there is a highly trusted record of where the container is.

Importantly, it is not possible to alter a block on the chain as that would invalidate every block dependent upon it. This means that fraudsters and hackers cannot go back into the history of a container and make it ‘disappear’.

As Maersk is doing and Antwerp is piloting, blockchain offers an irrefutable digital footprint around each container. As a secure system access can be restricted to limit the risk of criminals identifying and targeting containers. Each container’s blockchain ID is updated as it is moved. This means that there is a highly trusted record of where the container is.

This is not the only project where a port is looking at blockchain. In Dubai the government has set out a blockchain plan for Dubai Customs and Dubai Trade. It is also expanding its plans to include banks, shipping companies and airlines. It expects this to speed up the transit of containers through the country and deliver massively cost reductions.

With an annual volume of more than 208 million tonnes of maritime freight handled, the presence of the largest petrochemical cluster in Europe and extensive storage capacity, the Port of Antwerp is the largest integrated maritime, logistics and industrial platform in Europe.

The port accommodates the largest of container ships, the so-called Ultra Large Container Ships (ULCS). At its Deurganckdock, Antwerp can serve container vessels with a draught up to 16.0 metres travelling up-river and 15.2 metres down-river. Every terminal has a tri-modal access. This delivers fast and efficient barge, rail and road transport to and from the European hinterland.

The port possesses a modern infrastructure, facilities and equipment. Semi-automated operations and highly trained personnel contribute to productivity of up to 40 crane movements per hour per crane on average. This, Antwerp claims, is by far the highest productivity in Europe. These container terminals implement high standards of security and control, hence the blockchain interest. With more control comes less ‘wastage’ (or avoidable costs, whether criminal participation or bureaucracy.

The T-Mining approach in Antwerp

T-Mining is an Antwerp start-up. It has developed a solution for the widely recognised problem summarised above (though ET does not know which variant of the technology T-Mining chose – which may yet matter as the concluding section below describes).

When a container arrives in Antwerp’s port a truck driver collects it from the terminal. The appropriate person requires a PIN code to ensure he or she picks up the correct container. But several parties may receive this PIN code. This is a risk. Somebody with malign intentions can copy the PIN code. If this happens the consequences will cause problems and costs.

The Antwerp port blockchain solution overcomes these issues. It enables safer and faster transfer of valuable objects, digitally and without a middleman. With the T-mining blockchain platform, the right truck driver receives clearance to collect one particular container. There is no possibility of the process being intercepted. Furthermore, the T-Mining blockchain platform exploits the distributed network so that a transaction can go ahead only if there is consensus among all participating parties. This prevents attempts at fraud or undesired manipulations.

The pilot project is currently running in the port of Antwerp albeit with a limited number of parties. The intention is to test whether all works smoothly in practice before expanding. Thanks to involvement by the City of Antwerp there is a link to an office in Singapore.

Conceptually, what Antwerp is doing with T-Mining and blockchain makes sense. All the problems described are common to the ‘container industry’ with its many and geographically diverse participants. Yet there are so many other competing initiatives originating in different parts of the container value chain. For example, ET alone has written about Dubai, Bogotá and SEB (as well as Maersk) and their use of blockchains in this arena.

The are several apparent conclusions to draw:

If blockchains interoperate there will not be a problem. But this requires proof. There are many unanswered questions about interoperability between blockchain projects on the same platform. In addition we are only just seeing the two main blockchain initiatives, Hyperledger and Ethereum, looking at interoperating with each other.

Blockchain solutions for the shipping industry will start by competing. The likes Dubai or Antwerp hope to gaining competitive advantage. But if every customer and shipper has to work with multiple different blockchains, which don’t interoperate they will, quite reasonably, resist. Expect the coming years to: