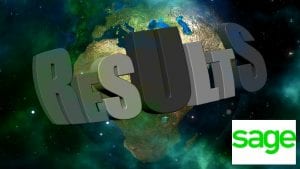 Sage issued a trading update after a strong first quarter. However, while it reiterated its forecast for the full year, it was not increased.

Jonathan Howell, Chief Financial Officer, commented: “Sage has made a strong start to the year, accelerating growth in line with expectations. Sage Business Cloud has performed particularly well, driven by continued growth in both cloud-native and cloud-connected solutions, as we execute on our strategy to be the trusted network for small and mid-sized businesses. Accordingly, we reiterate our guidance for the full year, as set out in our FY21 results announcement.”

Total revenue grew by 5% year over year to £458 million, boosted by recurring revenue growth of 8%, to £429 million. While other revenues (SSRS & Processing) dropped by 22% to £29 million, this is no longer a significant element of Sage’s income. Its remaining revenue is less than the growth in recurring income.

Sage Business Cloud is now the real engine for the company’s future growth. Cloud-native revenues increased 44% to £90 million, mainly through net new customers. With the upcoming release of the Sage Intacct/Brightpearl Retail solution imminent, 2022 might see it start to accelerate again. It completed the acquisition of Brightpearl on January 17th.

These results would have been better if sterling hadn’t strengthened slightly against the dollar during the quarter. Sage has divested much of its underperforming regions and is now focused on growing its cloud solutions for the SME markets. Sage Accounting and Sage Intacct seem to be performing. While both products are leaders in the latest G2 Grid for Accounting, only Sage Intacct is currently a momentum leader.

Sage has had a good start to the year, with Sage Intacct the jewel in its crown. The company is no doubt excited by the combination of Sage Intacct and Brightpearl, and its potential.

Brightpearl was already a leader in Retail operations management solutions. With the strength of the Sage Intacct accounting solution alongside it, this could be an interesting year for Sage. How quickly can it accelerate sales for Brightpearl through its much larger sales operation? That may not happen until Q3 or Q4, but it should help power further growth.

The big question around Sage Accounting is whether it captures enough net new customers compared to Xero and QuickBooks. Or is it defending its existing customer base with upgrades?