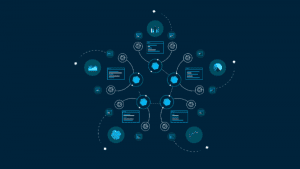 BlackRock has begun to use Veris, Axoni’s distributed ledger network for equity swaps. In so doing it (Blackrock) joins Citi, Goldman Sachs and other counterparties.

The Axoni platform allows for all parties on a trade to match and confirm all trade terms upfront and remain synchronised on post-trade events such as amendments, positions, and cash flows through the lifecycle of the swap. BlackRock will leverage Axoni’s software through integration with its Aladdin operating system.

Mark Cox, COO of Global Investment Operations at BlackRock, noted, “Today’s announcement is a significant milestone and the culmination of years of collaborative industry research, design, and development. The Axoni platform will help us build scalability while mitigating risks in the investment life cycle beginning with equity swaps. We see great potential in a distributed ledger network for uncleared derivatives as we continue to prove out this new area of innovation.”

The base layer of Axoni’s distributed ledger infrastructure (blockchain) is what it calls its ‘AxCore’ technology. This serves as an underlying framework that seeks to:

For Axoni, once it has established a blockchain network, distributed applications can deploy by using smart contracts to encode data, calculations and event-driven activity on the blockchain. This ensures all relevant parties remain synchronised on the value and/or state of an asset or contract – regardless of complexity.

In this environment, Axoni offers a suite of enterprise software to support the integration of blockchain infrastructure into the complex systems already used by the largest financial institutions. These tools, available for client use, include those for:

Equity swaps and the Blackrock dimension

Blackrock’s adoption of Axoni comes after several years of engagement – between BlackRock, Axoni and other large financial institutions – to evaluate the use of a distributed ledger network for the post-trade management of derivatives. Step one starting with equity swaps.

Veris uses the ISDA Common Domain Model (CDM – see above). This is an open-source, standardised model for derivative trade processing. It brings consistency to how firms represent derivative events and products in order to reduce costs and risks associated with inconsistencies in trade processing.

Carl Forsberg, Head of OTC Markets at Axoni, said, “Axoni is excited to add BlackRock to the network. Sell-side participants will benefit immensely from using a shared platform with one of the industry’s most important swap counterparties. BlackRock will bring significant efficiencies to the network by driving adoption of standardized post-trade swap data models and workflows. We look forward to continuing to collaborate with BlackRock and the rest of the industry to innovate and improve the post-trade ecosystem.”

BlackRock says its Investment Operations will use Axoni’s software internally. Its goal is to make these capabilities available to Aladdin clients following further integration and development.

The significance of Blackrock joining Axoni was summed up by Brian Steele, Global Head of Market Solutions at Goldman Sachs, who said: “BlackRock joining the Axoni network represents an important step in the evolution of market infrastructure and is a direct result of the strategic partnership between our firms.

“We look forward to continuing these efforts with new and existing network members, working together to digitally standardize trade events and re-architect the derivatives post-trade ecosystem, while leveraging our open source data management platform Legend to create more transparent standards for data governance.“