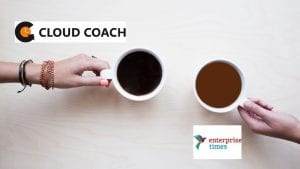 Enterprise Times recently spoke to Peter Lee, co-Founder and CEO of Cloud Coach. 2020 has been a strange year for PSA vendors. After an initial halt in business during March, it seems that many companies are looking to implement, work management, PPM or PSA solutions. Enterprise Times first asked Peter how the company is doing now, a year after ET last spoke to him.

“We grew pretty well last year, the first half-year was a write-off, we had a really strong second half of the year. We spent most of last year getting our internal processes set up so we could grow the business this year. Everything was around process efficiency and making our provisioning processes quick, automating when we get customer orders through or add on orders. We made the onboarding of clients a much more streamlined process so we can onboard faster. Essentially we have redone the whole organisation.

“Whereas in the past, we had what we call unconnected goals, everything this year has been driven towards one connected goal at the top, which is essentially ACV (Average Contract Value) growth per month. Everyone’s incentives are all based on ACV. Its ACV onboarding for implementation. It’s ACV created in opportunities per month for marketing and ACV sold for sales. Everyone is lined up in the same direction.”

When ET spoke to Lee last year, he spoke about BMC and Salesforce’s relationship to the organisation. ET asked whether those have evolved at all?

“Over the last year, not so much. We are waiting on a case study that Salesforce is working on for us around a Service Now replacement. We did so We have won a couple of deals off Service Now lately. One of them had no Salesforce deployment in the organisation.“

There have been no big announcements by Cloud Coach over the last year. What has been updated in 2020, and what is on the roadmap for 2021?

“We introduced the project console in the back half of last year. This gives a very smooth way to move between projects, based on customised views, and different areas of projects. We might have 20 or 30 different screens related to a project. There are screens around the timelines, financials, documentation and what we’ve made is completely configurable for business. Different parts of the business can have completely different project information showing. We have three releases this year, April, July, December. I won’t go into all what’s coming, though we are launching WaterScrumfall in April.”

WaterScrumfall, also known by some as Wagile is a combination of the two methodologies. Lee explained why it s important adding:

“A lot of especially high tech companies, when they’re onboarding people, they have a waterfall project with a start and end and various waterfall tasks. Then there are build phases going on for the customer and configuration. Those tend to be more sprint based. Essentially we will have the ability to put sprint’s throughout a Waterfall project, and seamlessly move data backwards and forwards between them.”

Last year Lee talked about adding languages, what is the status of that?

“We are continuously working on just add more languages. I wouldn’t say it’s 100%. But there’s a good percentage of our product that would just change with language and region based on their users’ locales and Salesforce. We’re probably about 50% through, probably going to get to 100% this year.”

The big change to product

Cloud Coach has also worked on a major project to ensure that all their products were on a common database and a common set of objects. It means that all tiers, including Starter, Team, Enterprise and Ultimate, will have more commonalities. It will make the upgrade process between the tiers far easier.

In December it launched the project console for the Enterprise and Ultimate tiers. Lee revealed that they are working on the license management for the tea and starter tiers. These are due for launch in Q2 2021. There are other benefits for this common approach, according to Lee.

“By doing that, the bottom tier can get access things like Water-scrum-fall and the Agile and everything we have. There’s going to be a lot more functionality in our bottom tier as a result of it and a much easier upgrade path.”

“50% growth and to continue rolling out best of breed products. We’re working on something that’s quite ambitious planned for the back end the year. I don’t want to talk about yet.

“We recently changed our focus from project management to almost like Process Management, if it makes sense. Most of our big clients are winning repeatable processes through projects. A lot of our product design is around: how can we support our customers to run repeatable processes through projects. It’s less around the ad hoc single project manager who wants to create something on his own. It’s more about, process-driven projects, which allow the management to have key metrics out of that. From a product side, the key around that is enforcing that throughout the product, throughout the year.”

Last year it felt as though Cloud Coach lacked a bit of focus, it feels like you’ve got a sharper focus now.

“We’ve definitely honed that. Our target market is really around that 500. Our sweet spot is the 500 to 2000 person, company. Industries are high tech, project-based professional services are definitely our sweetest two. Healthcare, probably not far behind, it’s number three.”

One area of the business that seems to have been put on hold was international expansion. However, the company has grown by nearly 50% recently in terms of its employees. What is the international strategy now?

“Right now is we are building under UK teams. From an outbound marketing, our marketing target will be UK and US for this year.“.

You were Considering fundraising in 2020, is that still in the plan?

“No, we canned that for this year. I don’t think we could grow faster this year than we can do with our own funding without segmenting quality, and so we will keep running as we are.”

So no acquisitions then either?

“The market this year is going to be, like everywhere, tough. For us, it did hurt us not having trade shows last year. We used trade shows to quite good effect in past years. We used them as good places to meet customers, to meet prospects, partners. There are going to be no trade shows, again, this year, by looking at where things are. I don’t think we acted quick enough to that last year. This year, we have got a plan. We are trying to produce more high-quality videos to showcase. More focus on the online market. In the past, we haven’t really done a ton of things like Google advertising; we relied on trade shows. We’re getting smarter about internet-based marketing this year.

“There’s going to be more definition. If you look at the (Salesforce) App exchange, how they’re bringing in bot chat now on there. That’s going push some tiering between the Salesforce partners in terms of the recognition of who they want to be available for the bigger companies.”

“Cash flow is always the challenge as a growing business, probably hiring as well, finding good people. The problem with the new remote market In the past if we wanted to hire a sales guy who’s really good out in Texas, but he’s not in one of the big cities they were ignored by the big guys. Now the big guys are hiring sales guys from anywhere, so it’s a little harder to find that out this year.”

What is the latest business book you read?

“Brick by Brick, (by David Robertson (UK/US)) about Lego, it wasn’t as interesting as it could have been, it’s not my favourite. The Hard Thing About Hard Things (by Ben Horowitz UK/US) is my favourite business book ever.”