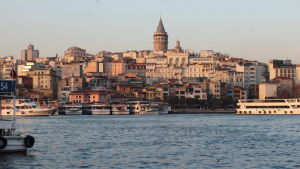 The first ever Eurasia Blockchain Summit, hosted by Huobi Group and Kemer Partners, was held in October 2019. It hosted a variety of local and overseas representatives who discussed a ‘blockchain revolution’  taking place in the region.

Ahmet Cüneyt Selçuk, Chief Project Director at Investment Office of the Presidency of Turkey, said: “We invite you to invest in Turkey for…a maturing ecosystem backed by supportive reforms, increasing R&D and innovation activities by multinational companies, young population with high penetration rates for new technologies, continuous investment in diversified sectors, and opportunities to co-invest with the Turkish Treasury.”

“Given a large part of the Turkish population is already having its first touch points with blockchain technology, the barriers of entry for more applications are significantly reduced,” said Fouad Soultana, COO of Novem Gold AG. “Turkey has a positive future ahead of it with the rapid growth of its Fintech market.”

The two-day event saw major companies disclose ambitions to participate in what those there viewed as a booming market. Among announcements made was one by Huobi which introduced development plans underway for a Turkish Lira (TRY) fiat gateway in Turkey.

The Lira gateway on-ramp is set to launch by the end of 2019 with a TRY/US$ pairing. Its purpose is to enable retail users to access more assets with greater liquidity.

Regional President of Huobi Group Mohit Davar elaborated on Huobi’s future plans for Turkey and the importance of local involvement. “We need partners on the ground and we need people on the ground. Beginning with Huobi’s landmark introduction of TRY/US$ fiat channel, and continuing with lowering transaction fees and the benchmark to participate in Huobi Prime for Turkish users, we plan to demonstrate our deep commitment to the community via localized approaches directly from our team in Istanbul.”

Leading DeFi services and tech providers announced intentions to expand their services to Turkey. For example, BHEX Global Managing Director Tyler Wu announced the launch of BHEX’s ‘Contracts Cloud’ service. This  will propel the development of the contract trading market, especially for the mid to small-size exchanges. BHEX Cloud serves:

On the first day, Stella Kung, CMO of the open source blockchain network Qtum, revealed the foundation had launched its Qtum 2.0 mainnet through a hard fork at block height 466,600 on October 17th. While this marks Qtum’s first major upgrade since its mainnet launch in 2017, its specific relevance to Turkey was unclear.

WaykiChain CEO Gordon Gao announced its all-inclusive public chain ecosystem and Waykichain stablecoin. According to Gordon, WaykiChain’s stablecoin WUSD could bring massive adoption of blockchain technology with its three token system. The WaykiChain ecosystem, with its advanced technology and its various funding program, aspires to lead the way for a new generation of public chain.

During the opening speech, host and Kemer Partners co-founder Arfat Cenk Erkin predicted that: “Turkey will soon lead as a hub for blockchain development across the European and Asian regions, and this transformation is set to be one of the most critical technological developments for our country.”

Efforts to build a mature market in regions like Turkey are underway. The fact that there was Turkish Government support is significant. The number of attendees was impressive.

Turkey’s economy is not, and has not been for some time, in a healthy position, despite its position at the intersection of Europe and Asia. To be able to attract, including from outside Turkey, so many to Istanbul is an achievement. But does it add up to substance?

In the view of Enterprise Times, there is insufficient evidence that to date that Turkey is becoming a blockchain warehouse. It has done so in other fields (manufacturing, for example). It could yet do so with blockchain, if the use cases exist.