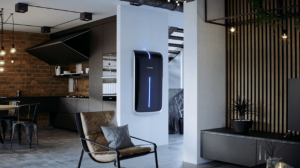 FUERGY is a Slovakian renewable energy company. It has launched an AI-powered device (see centre of the photo) which utilises blockchain to help users optimise their consumption, maximise their energy efficiency and receive benefits for participation in an energy market.

“Energy demands are constantly growing,” said Radoslav Stompf, CEO and co-founder of FUERGY “Our company provides a scalable solution for renewable energy, where consumers can save and potentially earn money via the production of clean energy.”

FUERGY’s device makes renewable energy effective and affordable for everyone. With a FUERGY device, people or organisations can:

Device owners, in effect, create a virtual community regardless of distance. In combination this works to deliver an energy balance – aided by AI-powered surplus energy trading. Users efficiently generate electricity to:

The device connects a home battery and renewable energy generator with the FUERGY ecosystem. This will enable users to share the generated energy on its blockchain-powered market. FUERGY developed both the hardware device and the AI-powered software that it contains (to ensure hardware compatibility) for maximum security:

Renewable energy and point of consumption

Consumption of renewable energy is often inefficient – because the times when the highest generation efficiency occurs does not coincide with the highest consumption. The logical solution is a control system addressing all three of:

If green energy generated accumulates at one time with consumption happening at another time, this drives efficiency. In turn this will significantly reduce the dependence of the delivery point on existing grids. The key is to understand that simple accumulation by devices such as home batteries no longer offers an effective solution. Efficiency of production, accumulation and consumption supervised by a control system which can analyse all available data changes the equation. Based on AI and predictive models, such systems can control processes in order for efficiency without compromising comfort.

If the production moves as close as possible to the point of consumption, the losses caused by the transformation of the voltage at the individual steps of traditional electrical distribution reduced. Put another way, consumption of generated electricity on the same network where it arises (whether it is a site connected to a transmission system or a micro-grid) reduces the main grid burden.

To solve the challenges of transparency, efficiency and subsidies (to support the growth of renewable resources), FUERGY believes it is best to distribute those grant schemes through use of blockchain. Every control system will know exactly how much green energy generates. This can be the basis for storage, selling and consumption with rewards arriving via blockchain smart contracts.

Such an approach, FUERGY asserts, is maximally transparent and fair. It does not generate additional costs.

The implementation of such a system enables subsidy schemes to move from regional or national (or even transnational) levels to the local level. Cities, villages or communities can create subsidy schemes for citizens by combining control systems, blockchain and smart contracts.

The FUERGY goal is to build an ecosystem consisting of unlimited numbers of nodes. These nodes become market participants, redefining where electricity is produced and consumed. Such an approach should contribute to combating climate change as well as improving energy security (arguably as important as food security). In addition, there may be less need to build new distribution grids – because it will become easier and more effective to use existing grids.

The scenario described by FUERGY, essentially delegating to local levels in the first instance but with participation in conventional grids could reduce current distribution network loads. This is the main attraction. The secondary one is to provide a mechanism to subsidise green energy production which is transparent for all.

Overall, the FUERGY approach is not unique (for example, see NEMOGrid or Power Ledger). What may be is the combined focus on the local, the generation/storage/selling and the adoption of blockchains and smart contracts.