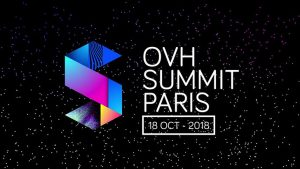 OVH now trades with two businesses, OVH Worldwide and OVH US who address two different markets. Getting them to work together to share costs and products while retaining their independence in terms of data management is central to OVH’s previously announced strategy. With Klaba promising that OVH would become a €1 billion business by 2020, we wanted to understand how it was planning to get there.

Klaba was incredibly frank and open about how the businesses would work together, how products would be launched and his goals. He talked about his plans to acquire companies as far out as 2025, something that few business leaders would dare to do.

One of the goals Klaba has for OVH is to be the alternative cloud to the big players. To do that he is prepared to take a different route to helping customers build their solutions. One example is AI. While other players are using customer data to train models, Klaba promises OVH won’t. He sees trust as a key selling point and that means honouring that European view of privacy.

Klaba’s passion for the business he has built over 19 years is also evident in the interview. Make no mistake, he has clear personal goals not just for OVH but also the ecosystem of OVH partners.

To hear what Klaba had to say listen to the podcast