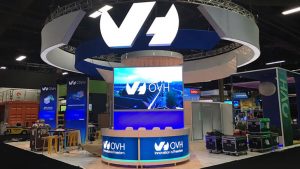 OVH Group has announced a new CEO. Michel Paulin is to take over the job from Octave Klaba with the immediate goal of driving the OVH Smart Cloud strategic plan. Bringing in a new Group CEO is a good move by OVH. Klaba took back the job of CEO last year as the company brought in new funding and acquired vCloud AIR. It is now time for a new CEO to take the company forward and allow Klaba to concentrate on his role as Chairman of the Board.

Paulin arrives with a long history in telecoms and IT. His experience at board level both as a COO and CEO will serve OVH well. Importantly he has the experience of taking a company public. He led the IPO for Neuf Cegetel. That was 10 times over subscribed and Paulin later oversaw the acquisition of the company by SFR. Nine years later he was to return to SFR to become CEO only to resign due to the intensity of the role.

In a statement, Paulin said: “It is a great honour for me to join OVH. I am looking forward to lead this team of 2,500 women and men on four continents, with its strong and unique culture of innovation at the service of its clients. I am delighted to work with Octave; everyone knows his vision, his entrepreneurial strength and his great humanity.”

Delivering on Klaba’s vision will be no easy task

Given the rapid growth of OVH Group and the targets set by Klaba, Paulin might not find this role any easier than being CEO of SFR. OVH is expanding rapidly and has received significant inward investment to do so. It has built out its data centre estate around the world and launched a US subsidiary OVHcloud. It has also made one major acquisition which has paid off and may well be looking at more.

Paulin’s task will be to execute on Klaba’s vision of being more than just Europe’s leading cloud provider. Klaba believes that OVH can be a tier one cloud company and compete with the US and Chinese giants such as Amazon, Google, Microsoft, Alibaba and TenCent. It still has a way to go to achieve that.

One of the first tests will come at the OVH Summit on October 18th in Paris. Analysts, press and customers will want to know what his plans are for the OVH Smart Cloud strategic plan. They will also want to see if the company is on track to meet Klaba’s statement from OVH Summit 2017 when he said: “Two years I said we are no longer a start-up. Now we are a multi-national with 2,100 people. By 2020 we will be an enterprise of more than 4,200 people with revenues of over €1 billion.”

Paulin has big shoes to fill but that is unlikely to worry him. He has run larger companies than OVH Group and ones with a more aggressive strategy. His first goal will be to explain where the company is going and how it will get there. The growth from the US unit, OVHcloud has been impressive and it appears to be delivering revenue and customers ahead of schedule.

The deployment of VMware Cloud Foundation by OVHcloud is also good news. It shows that the company is succeeding in the mid-sized enterprise market, at least in the US. It also shows that OVH is capable of moving substantially up the value chain. The question is: will all this help it achieve the goals set by Klaba ahead of time?

OVH has also taken on a lot of inbound investment and spent that money expanding its footprint. At some point those investors are going to want something back. This raises the question: Is Paulin going to start preparing the company for an IPO? He has experience of doing so and it would bring in more money for expansion.

Will Paulin address all of this at OVH Summit in seven weeks? We will have to wait and see but that won’t stop the speculation of an IPO growing.