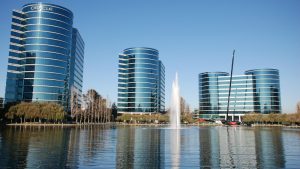 Oracle joins Amazon, IBM and Microsoft with its offer of a blockchain service. Oracle says that various businesses are already deploying an early adopter version of the Oracle Blockchain Cloud Service (OBCS). This has now moved to be generally available.

Jason Loyet, CEO of Solar Site Design said: “We helped found the Energy Blockchain Network earlier this year after realizing stakeholders in the solar project ecosystem needed a single source of truth with immutable records, so they can trust project status data. [This means] we can now program each project’s status, list requirements to move forward, and rewards value contributions in near real-time.

“We are really happy with how easily NetSuite SuiteCloud Development Platform and Oracle‘s blockchain platform integrate with pre-packaged blockchain APIs, allowing us to explore new ways to develop smart contracts, manage the projects and reward programs.”

The OBCS enables organizations to build blockchain networks to:

Oracle’s has built its blockchain platform on the The Linux Foundation’s Hyperledger Fabric. The service pre-assembles all the underlying infrastructure dependencies, including:

In addition, there are a number of operations and monitoring tools integrated under a single console. This should expedite the set-up and application development process.

Oracle Blockchain Cloud Service provides customers with a development platform not only to build their own networks but also to integrate with Oracle SaaS, PaaS and third-party applications already in use, as well as other blockchain networks and Oracle PaaS services. It also enables users to provision blockchain networks, join other organizations and deploy and run smart contracts to update and query the ledger.

More on the OBCS platform

In effect, OBCS offers an Oracle-managed cloud platform backed by a 99.95 percent availability SLA. This has:

Further benefits available with the Oracle Cloud Platform include:

Additionally, Oracle will deliver new SaaS applications to use blockchain technology for common use cases, such as:

This plug-and-play capability should result in:

“Blockchain promises to be one of the most transformative technologies of our generation,” said Amit Zavery, executive vice president, Oracle Cloud Platform. “We are excited to announce the availability of Oracle Blockchain Cloud Service. It is the result of years of R&D alongside our valued partners and customers. With Oracle’s platform, enterprises can enhance their business, eliminate unnecessary processes, and transact with their distributed networks more easily, transparently and securely than ever before.”

Among the ‘big’ players, Oracle is the last to arrive at the ‘blockchain-service-in-a-cloud-party’. But it is not far behind in time, and possibly further ahead in assembling the extras which can make blockchain development faster (like track and trace, provenance identification, warranty and usage, and cold chain).

Amazon justifies its blockchain service in the cloud on AWS with the following assets:

AWS Blockchain has templates. These make it easier to:

Microsoft offers a ‘Blockchain Workbench‘ (currently marked as being in preview). Like Oracle, Amazon and IBM , this will ‘connect your blockchain to the cloud without the heavy lifting’.

The objectives of the Azure Blockchain Workbench are to:

For all four major players, blockchain clearly promises a power to transform how industries and business do business. Making interactions more secure, transparent, efficient and cost-effective is the goal.

Blockchain has the potential to impact almost all industries. It could apply to a range of verticals – from transportation to supply chain and logistics to energy, retail and ecommerce, financial services,  telecommunications and the public sector. The good news for enterprises, including the public sector, is that  the ‘Big 4 in blockchain’ (or 5 if you include SAP) has competing offerings with which to experiment. They have done much of the initial heavy lifting. Now it is up to customers to take advantage.