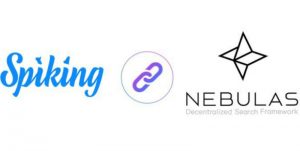 Spiking and Nebulas have signed a Memorandum of Understanding to develop core search technologies. Spiking is a blockchain asset validation and AI-driven crypto trading infrastructure. Nebulas is a decentralised platform which provides a search framework for all blockchains. It characterises itself as “a next-generation public blockchain which aims for a continuously improving ecosystem via its blockchain valuation mechanism.”

“Nebulas brings a game-changing element to the methodology in which Spiking searches and processes information from the blockchain,” said Dr. Clemen Chiang, CEO of Spiking. “This increases our value-add greatly to the trading ecosystem of the mega cryptocurrency market.”

The Spiking and Nebulas collaboration

Launched in April 2016, Spiking is Singapore’s first financial-technology trading app dedicated to helping the average trader follow the reputable investors as they buy and sell shares on the stock market. To date, Spiking tracks over 170,000 significant shareholders across six stock exchanges in four countries:

The Spiking platform enables traders to find ‘whales’ – key executives of large companies behind cryptocurrency tokens, mining pools and/or large holders. Once found, traders can follow the cryptocurrency trades (of those whales). In effect ‘followers’ meet whales in a completely transparent environment. This capability builds on a technology stack with fully audited security standards. The Spiking platform intends to do this by using smart contracts on the blockchain. This will allow users to:

With this partnership, Spiking will be able to develop its proprietary search algorithm based on Nebulas core technologies. It is this which will enable whales and customers to locate critical information across multiple blockchains. This found information, in turn, will serve the function of predicting cryptocurrencies price movements.

Nebulas is a next-generation public blockchain, aiming for a continuously improving ecosystem. Based on its blockchain valuation mechanism, Nebulas proposes:

Nebulas Force (NF) provides the blockchain and apps built on it with the capability to self-evolve. NF will, therefore, allow Spiking’s search framework to improve and develop (without a need to fork). This places control of project development more firmly in the hands of Spiking.

Nebulas works on the Developer Incentive Protocol (DIP), which encourages and rewards developers of smart contracts and DApps on the Nebulas Platform. Spiking will partner with Nebulas to contribute to this ecosystem:

If you wanted a reason to fear blockchain technology this might be a development to think upon. The transparency which comes with blockchain, which can be a positive force in (say) a supply chain environment, has its downsides.

From what Enterprise Times can tell, and this announcement confirms only a Memorandum of Understanding, the combination of Spiking and Nebulas will enable third parties to track the investment and acquisitions of ‘whales’. This might be good. It also might open access to what might reasonably be thought of as private. Judging which will be difficult.

Irrespective, enterprise users would do well to conduct some form of review before going live with any blockchain initiative. The question to ask: what might blockchain transparency tell others which we would prefer not to be visible?  Transparency cuts in many ways.