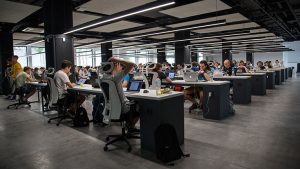 SalesAgility has joined the Open Source Initiative (OSI) as a Premium Corporate Sponsor. In some ways it is surprising that it has taken this long for SalesAgility to have joined OSI. SalesAgility are the developers of SuiteCRM, the leading open source CRM software. It was created in 2013 when it forked from SugarCRM. Prior to 2013 SugarCRM had an at times fractious relationship with OSI.

Up until 2007 SugarCRM used a license that was not approved by the OSI. In 2007, however, it started using the GNU General Public License (GPLv3), a license backed, though not quite approved at the time by the OSI. A love hate relationship continued for a few months with SugarCRM CEO John Roberts not pulling any punches about his views on the OSI.

Patrick Masson, General Manager of the OSI commented: “We’re so very pleased to have SalesAgility’s support, especially now, as the OSI enters it’s 20th year. We’re thrilled to see the success of open source and the success of companies like SalesAgility who are authentically engaged in the open source community. This is where our work over the next decade must now focus, learning from that success to help companies understand best practices so more may realize the benefits of community-driven development. SalesAgility is one of these that we can reference and which can serve as a mentor to others.”

This announcement comes shortly after SalesAgility announced the latest version of SuiteCRM, version 7.10. They also unveiled a new documentation platform for users, administrators and developers. While the organisation is employee owned and the software community driven, it is profit driven, offering services such as consultancy, customisation and hosting. This high level of membership within OSI should see it have a greater input into open source development. As the leading player in the Open Source CRM field its views should carry some weight.

Gary Soper, founder of SalesAgility commented: “We are excited to be members of the Open Source Initiative. The work the OSI has done over the last 20 years is extraordinary, and we are looking forward to collaborate together to ensure the success of open source in all fields.”

This might also presage the opening of its first US office. The company currently only has offices in London, Manchester and Stirling.  Joining the OSI might be the first step towards a greater presence in the US market.