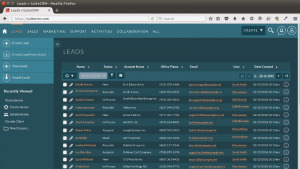 SalesAgility has announced the release of the latest version of SuiteCRM and a new online documentation platform.

SuiteCRM is the worlds largest open source CRM, it was created after SugarCRM stopped its open source development of the product. It was first released in October 2013 as version 7.00. The latest release is 7.10 and comes with a series of enhancements.

The second announcement around the documentation platform sees SugarCRM bring online documentation to the wider community. One of the changes is that it enables non developers from customers to add value to the community.

The key enhancements of this latest version include an improved user experience, a new REST API, and Survey management. Other enhancements include several focused on companies to meet the upcoming GDPR compliance regulations.

User Experience improved: One of the criticisms of earlier versions was that the SuiteP Design themes were bloated. They often needed to paired down the theme to make it useable. The new release introduced a slimmed down SuiteP design. It also delivers a choice of four colour schemes.  These have been named Dawn, Day, Dusk and Night.

New REST API: The new API adopts the Swagger (OpenAPI v3.0) framework and promises detailed and clear documentation. It uses the JSON API and introduces OAuth 2.0. Despite the rewrite it maintains the functionality of previous releases.

Survey Management: This allows users to create, design and send surveys. The results are fed straight back into SuiteCRM. Companies are able to use the survey either as part of an email campaign or a stand alone webpage.

GDPR Features: Unlike other solutions SuiteCRM does not appear to have delivered the same rich functionality as other ERP vendors such as IFS. It has simply included a double opt out process for customer records. There is no inference that a Right to be Forgotten has been included in the new functionality. The GitHub entry has more details but no mention of this feature. It may be down to individual administrators to create this functionality.

The full press release details several other enhancements including:

Two factor authentication: This is now supported with a code sent by email which seems weak. It will be interesting to see how quickly the REST API is used to integrate other MFA solutions.

There are fixes to email functionality and integration with Fail2ban logging. Fail2Ban scans logs files and bans IP addresses that have multiple failed access attempts. It is another open source project.

There is also new suite of unit tests for developers as well as several fixed to bugs. The full release notes are here.

The new documentation is base on the Hugo engine. It has a simple free text search engine that is easy to use. It is divided into five parts:

There is life after SugarCRM for the Open Source SuiteCRM. The community has 87,000 members and allegedly more than 4 million users. This latest update sees some significant updates that could help catapult SuiteCRM into more companies. The REST API is a welcome addition but SalesAgility will need to persuade other vendors to integrate their software to the Open Source software.

Whether this is the first step to having a marketplace of sorts is yet to be seen. It may look to bring in integrations from other Open Source projects, it will be interesting to see how many it brings on board in the next few months.

The new documentation platform is clean, comprehensive and a welcome addition. If further contributions are made this could enhance the reputation of the software and bring it to the attention of other businesses.