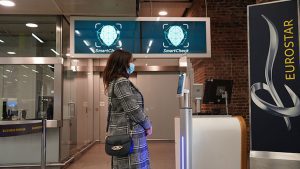 Andrew Bud, Founder and CEO, iProov, said, “This secure, convenient and privacy-protecting technology will make life easier and safer for travelers around the world.

“The days of rooting around in your bag for your passport or hoping that your phone battery doesn’t run out before you show your e-ticket at the gate are over. It’s effortless and convenient while also delivering the reassurance and security that travelers expect.”

Who will be able to use this?

This trial is open to customers who have an iPhone and have purchased Business Premier or a Carte Blanche ticket. While that limits its use, to begin with, this is about testing and proving the technology before it is extended to other devices and travellers.

The biometric face verification uses iProov’s Genuine Presence Assurance technology. Its use of a one-time face biometric scan will make it easy to use for customers. Importantly, it will also tie them to their identity document. Should that document be lost, it will prevent anyone else using it to, in this case, get on a Eurostar service.

This use of facial identification has several benefits for travellers. It is swift and easy to set up. It will also speed their journey through the process of boarding their train.

Importantly, this is a trial for access to Eurostar trains at St Pancras International only. It does not mean that travellers will not have to undertake further identity checks at the UK border or when entering the European Schengen area. That may follow later once the technology has been proven and gone through several checks by different organisations.

This is just one of several emerging biometric solutions to make life easier for travelers. However, it is not just the travel industry that sees significant benefits from these systems. iProov already promotes its solutions for banking and other industries where compliance requirements for Know Your Customer are in place.

Interestingly, iProov doesn’t seem to go as far as idenfy. It recently released its NFC identification tool that uses facial verification and identity documents. However, it also reads the NFC chip on the identity document to improve assurance that the user is who they say they are. Will iProov look to add that level of additional verification later?