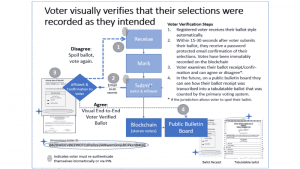 Pro V&V recently completed comprehensive testing of the Voatz Remote Accessible Ballot Delivery, Marking and Return (RABDMR) System. In the tests the Voatz mobile voting platform, met the applicable requirements for U.S. voting systems. Pro V&V is one of only two testing labs that is both certified by the EAC as a Voting System Testing Laboratory (VSTL) and accredited by NIST through the National Laboratories Accreditation Program (NLAP). Voatz uses a variety of technologies (including remote identity verification, biometrics and a blockchain-based infrastructure) to increase access and security in elections. .

“We are pleased with Pro V&V’s conclusions that Voatz operates exactly as it’s designed to operate,” said Nimit Sawhney, Voatz’s Co-Founder and Chief Executive Officer. “Their findings confirm our expectations, and add further fuel to support our mission that citizens can vote securely using a smartphone application and have total confidence their ballot is counted while remaining fully secret.”

The report on the Voatz voting platform

In a 47-page report, Pro V&V concluded that the Voatz platform “meets the applicable requirements set forth for voting systems in the U.S. Election Assistance Commission (EAC) 2015 Voluntary Voting System Guidelines (VVSG), Version 1.1, with clarifications or exceptions noted in Section 4.0 of the final version of Pro V&V Test Report.”

The evaluation was conducted in two phases. Phase 1 focused on a usability and accessibility review. Phase 2 consisted of the following: 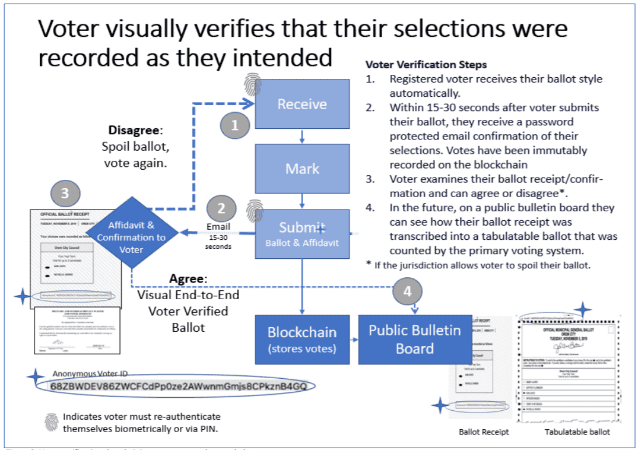 Pro V&V performed the testing to the VVSG 1.1 standards with one exception. It conducted the Accuracy Test on an abbreviated scale.

5 months of tests, including the mobile app

This testing included an analysis of the Voatz mobile applications’ use of native smartphone accessibility capabilities, including:

Security Testing involved an audit of the Voatz application source code, testing procedures and compliance with industry standards. As the report states, “Pro V&V verified various controls and measures to meet the required security standards including: protection of the critical elements of the voting system; establishing and maintaining controls to minimize errors; protection from intentional manipulation, fraud and malicious mischief; identifying fraudulent or erroneous changes to the voting system; and protecting the secrecy in the voting process. During the security evaluation, Pro V&V was able to verify that the Voatz RABDMR utilized a blockchain-based infrastructure from the server throughout the remainder of the process.”

Enterprise Times: why does this matter

Voatz says it has ‘completed’ 67 elections to date, including:

In 2018, Voatz partnered with the West Virginia Secretary of State’s office to enable a first-in-the-nation mobile voting pilot. This enabled deployed military service people to vote for the first time using an app on their smartphones.

2020 is likely to be a fraught election year, whether for the General (Presidential) Election or at state or local election levels. Mr Trump is already casting aspersion about (for example, mail in ballots). Anything  – like this from Voatz – that might (and there are now less than 100 days before election day) increase voter confidence in the process and the subsequent results has to be welcome.