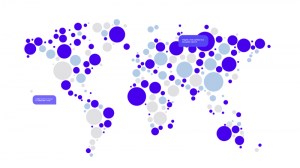 Alfa app and smartwatch intend to foster freedom to create and transact, reward users for their time, protect their privacy, and respect the chronological order of their posted content.

Alfa is a peer-to-peer, privacy-friendly, blockchain-based social media platform with an economic angle. It launched in early August on Indiegogo where it is seeking some Euros 700K+. Intended to foster an inclusive decentralized digital sharing economic ecosystem, the platform aspires to enable users to become micro-entrepreneurs and transact between themselves without intermediaries.

“This is technology that people will feel good about putting down,” commented Tony Tran, founder and Chief Architect, Alfa. “Time is the great equalizer. With its properties as a foundation, we can combine the digital wallet, mobile phone, social network, and market access into a low-cost and magical device that elevates all walks of life.”

How Alfa is different

Alfa is the operating environment for the Enzo Operating Network (EON). EON is an inclusive, decentralised, and open-data economy where Alfa members have absolute control over their data and privacy, with full liberty to monetise their time as they please. In effect, each member:

Alfa is platform which features a connected calendar to offer users a way to post and view content in a chronologically correct timeline. They will be able to:

“Alfa preserves temporal context which is critical for sharing stories over time. Algorithms hack content’s narrative to loop emotional triggers for the purpose of programming attention. By simply adding time, the game is changed,” according to Tran.

Based on its horizontal display of timelines, Alfa intends to allow users granular control and time-based features such as self-destruct and scheduled posts. It is also geared toward using Augmented Reality to provide users the opportunity to see content at specific times and locations which shows:

While Alfa’s freemium business model rests on selling advanced time-based ads to brands and advertisers, and features to users, the platform will enable users to choose:

“It’s a true content discovery engine that contrasts with what existing social media platforms do, which is monetizing people’s time and posted content without any compensation. Alfa users will be rewarded for the content they create and for the time that they spend discovering new things and sharing whatever they wish,” asserts Chan.

Alfa wishes to bridge existing disconnections and unify experiences across the technology landscape. The new network seeks to create an ecosystem where connections freely establish and users nurture these so that people can create value for themselves and for others in a mutually rewarding way.

As Tran describes it, current technology models have created too many demarcations and distractions. False signals fragment lives in ways that see users “herded inside walled-gardens. We’ve become digital livestock. This is a chance to unshackle and evolve.”

As micro-entrepreneurs, each Alfa user can extract from the platform as much monetised value as he or she chooses to pursue, create and benefit from.

On Alfa, users will be able to rely on a one-stop app that lets them freely and privately socialise, discover, create, and transact on an open web. By comparison, apps and platforms today tend towards the one-dimensional.

Alfa, on the other hand, hopes to offer a 3D way to navigate and experience an augmented digital parity of the real world in real-time continuity. That has the potential to translate into power awarded to users – with each user’s data safely and privately secured on the blockchain. Users decide what they make of the content they create.

Alfa intends, initially, to target the global sharing economy. This will allow buyers and sellers of fractional use goods and services – such as data-sharing, car-sharing, service-based tasks, home-sharing, and other services – to publish and transact on a decentralised open web.

The Alfa app, available on iOS and Android, is just one of several embodiments of Alfa. The app’s fluid bi-axial content navigation pattern makes it possible to deliver an appealing and intuitive experience on screens of any shape or size.

“We actually started on the most challenging surface area — a watch face,” said Tran, alluding to the Alfa Watch, a smartwatch that will be introduced to backers as a stretch goal of the Indiegogo campaign. “While the platform is easy to instantly access, it’s also designed to keep users from falling into the typical addictive behaviors that traditional social media giants want to develop.”

After two years of testing and development, and more than 10 blockchain patents pending, the Indiegogo campaign intends to raise $800,000. Backers are offered early access to the platform plus the possibility of acquiring the experimental Alfa Watch in exchange for support.

The claims are large and the possibilities sought are enormous. Whether they are valid is not clear.

For Enterprise Times what stands out is the Indiegogo dimension. In the recent past various forms of token or cryptocurrency offering have been the mechanism for raising money for blockchain based ‘innovations’. With Alfa, Indiegogo has entered the blockchain funds raising picture (although the amount raised to date is insignificant – not least because “campaign is under review (and) it is not accepting contributions.”). That does not mean others will not follow the same path.