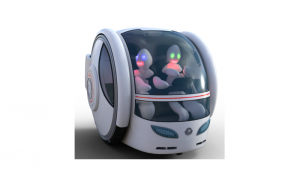 The Mobility Open Blockchain Initiative – MOBI – has announced the top three winners of phase I of the three-year MOBI Grand Challenge (MGC). Submissions were judged on the following categories: Creativity, Technical Merit, Potential Impact, and Feasibility. The top prize went to Chorus Mobility in cooperation with Decentralized Tech for the project involving negotiating road space and right of way payments for autonomous vehicles to reduce congestion.

“The goal of the MOBI Grand Challenge is to accelerate the adoption of blockchain and distributed ledger technologies for transportation. By bringing blockchain solutions to a global stage we are igniting worldwide interest in solving the problems of urban mobility, while making it greener, safer, and more efficient,” said MOBI Founder and CEO, Chris Ballinger.

Unlike the DARPA challenge, the MGC focuses on improving the capabilities of autonomous cars by sharing data and coordinating movement using blockchains. The goal of the MGC is to create a viable, decentralized, ad-hoc network of blockchain connected vehicles on distributed ledgers and infrastructure which can:

23 teams across 15 countries competed over four months to create blockchain or distributed ledger related solutions to address mobility issues. Held at the BMW Group IT Center in Munich, the award event featured finalist presentations and public demonstrations of potential uses of blockchain and related technologies. All concerned coordinating vehicle movement and improving transportation in urban environments.

“It is essential to create digital ecosystems that share infrastructure and use applications with agreed standards and controls. Common, open standards and ecosystems are the only way to speed up development and adoption of blockchain systems. We support the comprehensive approach of the MOBI consortium and look forward to welcoming so many experts from the international blockchain scene to the first European MOBI Colloquium at the BMW Group IT Center in Munich,” says Andre Luckow, who heads the department responsible for blockchain and distributed ledger technologies at the BMW Group.

Ocean Protocol, a blockchain powered data exchange protocol built to unlock data for AI, has sponsored US$1M worth of token prize for the three-year Grand Challenge with $100,000 worth of token prize being awarded to the three winning teams in this first round. “For autonomous vehicles to become safe and reliable, data must be shared to train the AI algorithms and models“, said Bruce Pon, Founder of Ocean Protocol. “Because if there isn’t a way to share data with trust and privacy, data stays locked up. Ocean Protocol uses blockchain technology, smart contracts and tokens to enable safe and secure sharing of data for the first time, guaranteeing control and auditability while protecting privacy.”

The first-place winning team, Chorus Mobility, collaborated with Decentralized Technology to create a project to address growing congestion in urban cities. Their platform:

The aim is to create a system for self-driving vehicles to safely communicate in order that traffic can move more efficiently. This has the potential to improve safety and reduce the cost of mobility.

“Chorus Mobility is proud and honored to place first in the MOBI Grand Challenge Hackathon. We see this success as a confirmation of the validity of our Vision to Solve Traffic with Blockchain and Autonomous Vehicles Software,” said William Vorobev, CEO and Founder of Chorus Mobility. “We deeply share MOBI’s ideas on the future of mobility and continue working hard on our joint mission to improve traffic safety, decrease the number of congestions and lower the cost of mobility by utilizing the latest breakthroughs in distributed ledgers and consensus protocols.”

The first runner up, Oaken Innovations, showed how blockchain enabled vehicles and passengers can pay for infrastructure use on demand. This project paves the way to a future where charging for road use is possible as well as charging for congestion, pollution and many other attributes of mobility. The intention is to create economic mechanisms which influence and improve transit behavior.

In third place there was a tie – between Fraunhofer Blockchain Lab and NuCypher. Fraunhofer Blockchain Lab applied platooning to allow for autonomous driving without releasing complete control to the car. This practice lowers fuel consumption and lessens CO2 emissions as the vehicles drive close together and at a constant speed. It has the potential to reap the benefits of autonomous vehicles before the world fully adopts driverless driving.

NuCypher partnered with NCIS Labs leveraging blockchain to enable vehicle owners to share their vehicle onboard diagnostics data (OBD) with organisations in an auditable fashion while maintaining control over access to the data. The significance could lead to:

As urban populations continue to rise, sustainable urbanisation becomes an ever-greater challenge – whether in the mega cities of today, in smaller urban units and on the roads within and between. To deliver successful management of existing infrastructure requires new approaches. This is what the MOBI Grand Challenge seeks to address.

According to MOBI, the next phase of the Grand Challenge will be to explore ways as to how blockchain and distributed ledger technologies can incentivise behaviors which:

DARPA was successful, eventually, with its autonomous driving initiative. Phase I of the MGC looks as if it is following DARPA’s success.