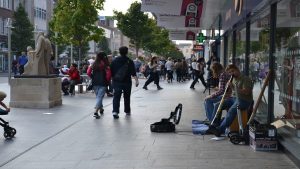 One pound in every £5 is now being spent online by UK shoppers according to the Office of National Statistics. This trend is showing no signs of slowing down. Commercial Finance company, ABC Finance has produced a report ‘How The High Streets Of The Future Could Look.’

The company undertook a survey to ask UK consumers how they felt about the current state of the high street. The report delves into the solutions being suggested, to see if there’s a light at the end of the tunnel for the high streets.

It’s no secret that the UK high street hasn’t been doing too well of late. Despite widespread public awareness and calls to support local city centres, 2018 has proven a dire reminder of the issue with many well-known brands disappearing from the high street.

The report’s key findings include:

In 2018, 1,300+ store closures had been reported as many large retailers focused on maximising profits by closing branches. This has left unused units littering high streets across the country. Recent findings by leading retail analysts uncovered that this has led to over 7 million sq ft of UK retail space sitting unused.

This won’t be helped by lowering footfall. Twenty percent of people surveyed claim that there was over a month between their visits to the local high street.

So, who’s bringing in the consumers into the high street and who’s shutting up shop? According to the Centre for Retail Research, the businesses that are thriving in 2018 include:

Those retailers who are experiencing a tough time and closing include:

The report suggests this is a great indicator of what people actually want from their high street experience. It mirrors the research into what the future holds. Respondents supported this outlook by stating that they preferred to shop at independent local retailers, as opposed to mainstream brands.

Many of the retailers fighting survival are traditional retail operations. In contrast the retailers thriving and opening up shops are more in the way of social and experience-driven businesses.

The results follow the trend of the survey, with over half of respondents (56%) opting for independent retailers. Shops who are more likely to offer a tailored service and a more personal touch.

According to Wusche, “We need to radically rethink the way that people shop at brick and mortar retailers. I would like to see high street shops return to older values of experience-driven customer service. I would happily pay a bit more to have expert advice and a cup of tea while I shop!”

What the future of the High Street looks like

The report suggests that councils and local authorities need to look at ways to draw people away from their screens and back to town centres. Action is needed, before there are no high streets left to save.

ABC has looked at the types of businesses that are still thriving and the opinions of industry experts. Add to this the results of the survey and it has delivered its prediction for how the UK’s high streets could be implemented and improved for the better over the next few years:

ABC took this knowledge to the British public and asked which of the features mentioned above, would in fact, make them more likely to visit their local high street.

A staggering one in three of respondents didn’t chose just one, but said they would support all of them being put into place.

Enterprise Times: What this means for retailers

HMV is the latest casualty on the high street demise, as the company once again goes into administration. Despite having the retail space to sell DVD, games, record albums and CDs, it never had the imagination to offer local bands and artist a space to promote themselves and play music.

As a business, they could have incorporated beacon technology to inexpensively drive footfall to stores. They could have utilised local neighbourhood apps and websites such as OFFiGO to engage with customers. They should have organised in-store gigs to drive consumer footfall through their stalls.

Instead, they did nothing and could not compete with Amazon. Now that business is in administration and may disappear from the high street.