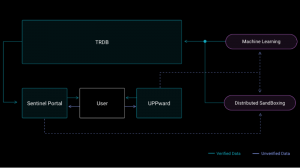 “Digital currencies’ decentralized nature has placed the responsibility of security on individual users,” said Steven Sprague, founder and CEO of Rivetz. “Rivetz and Sentinel Protocol share a vision to solve this issue this by enabling users to take control of their data and digital assets through seamless decentralized security solutions.”

The significance is that assets are available to asset owners and approved service providers via blockchain technology. Interactions with service providers become more efficient, more visible, and less costly because of the exploitation of the blockchain.

Rivetz’s security solutions depend on access to the Trusted Execution Environment (TEE), an isolated, measured computer environment separate from the operating system. By provisioning all digital transactions through the TEE, Rivetz ensures users’ private keys cannot be altered or stolen if the someone tampers with the operating system or there is a malware infection.

Securing the Rivetz Network uses secure enclaves in devices – such as the Trusted Execution Environments, Intel SGK, and IoT Secure Elements. These establish an open-source set of APIs which allows for an interoperable set of capabilities that provide the trustworthy experience for users. Sentinel’s Threat Reputation Database (TRDB) enhances secure provision.

“Digital currencies have become an increasingly attractive target for cyber criminals,” said Patrick Kim, CEO of Sentinel Protocol. “Sentinel Protocol and Rivetz are committed to raising security awareness. Together we are taking the steps to deliver blockchain innovations and provide a more seamless customer experience in securing digital assets and sensitive information.”

The TRDB also crowdsources threat data procured from ‘collective intelligence’. In addition, its UPPward extension products – for Chrome and Firefox – protect individual users by allowing them to verify the authenticity of:

Sentinel has also launched the Uppsala Security Forum. This acts as a:

The TRDB tackles two problems in existing cybersecurity. The first concerns the centralised nature of most databases in the security firms. Keeping threat information in one place makes it vulnerable to information manipulation and abuse. Such databases become an obvious target, like for the Sybil attack, or server hacking and service interruption. This is a fundamental problem of the centralised ‘client-server’ model across the Internet. In October 2017, for example, Russian state hackers stole NSA materials using Kaspersky’s antivirus software. Basically, hackers used the security tools to find vulnerabilities of their target.

The decentralised nature of blockchain mitigates the centralisation. Blockchain immutability makes it difficult to tamper with the data. The effect is to increase the security stability of servers which provide the data.

TRDB uses incentive scheme to encourage security professionals (and vendors) to contribute to building the threat database under the consensus mechanism, with feedback from participants. Through this ‘collective intelligence’, the Sentinel TRDB can collect:

In this light the partnership between the Rivetz Network and Sentinel, using blockchain, makes sense. Anything which increases security should be good (so long as an owner’s main objectives remain usable). The TRDB falls into this category.

What is less clear is the extent to which the TRDB adds value. Essentially this is unknowable. So another way of looking at this partnership might be to argue that Rivetz is turning to outsiders to shore up what it fears is a weakness. It is difficult to decide.