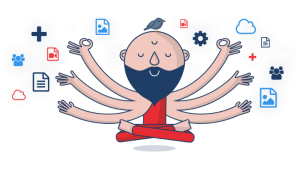 When Method Grid came out of beta and formally launched, Enterprise Times had the opportunity to talk to Steve Morrissey, MD of the Pi Group on how his company is using the software. Method Grid is the brainchild of Dom Moorhouse. It provides a process mapping solution that allows companies to map existing processes. They are then able to use the software in a variety of ways including onboarding, training, during live projects and for sales enablement.

The Pi Group offers talent advisory services to clients. It works or has worked with major multinational companies such as Heineken, Diageo, Unilever, Pepsi and Moet Hennessy. It offers a wide range of services, though it often leads with executive search. Other services include: headhunting, recruitment, talent retention, high performing teams and outplacement.

This delivers a service that when companies downsize enables them to assist exiting employees with soft skills training, such as interviewing, advice and practical help. For the company downsizing it helps retain a loyalty in their alumni even through a redundancy process.

Four use cases in a single company

The PI Group is one of the early adopters of the software which was originally free of charge. Now that the solution is commercial we followed up to see how the company is now leveraging it. We asked Morrissey what are you doing now with Method Grid?

Morrissey replied: “We still use it on a daily and weekly basis. We have four main uses for it. One is our internal training. Every time we have a new hire, we replicate the training programme. Then, we make it bespoke and individualised for that individual. For each of the elements that they run through we change the colour as they complete that particular area of the training module.“

Interestingly the marketing team is also considering use of the product. Morrissey believes that there is an application for the tool within Marketing teams for campaign management. It is widely used as a sales tool though.

Morrissey continued: “We use it for our sales capability. Anything we change in our journey of how we go to market and sell to clients, everything from the KPIs we expect the sales professionals to complete through to sales collateral, sales meeting methodologies, all the way through to how they bonus all linked within a particular grid.”

The last two uses of Method Grid at Pi Group are around service delivery propositions. Team to Tribe is a programme that the Pi Group delivers to clients. It aims to turn ordinary teams into high performing teams. The second is the Perpetual Ambition Outplacement Programme. This is the career advice and outplacement service that The Pi Group offers.

How do they use it?

During the sales process Morrissey’s team uses Method Grid to demonstrate the whole process. Morrissey said: “We house the 12 month client journey of that offering inside Method Grid. We actually showcase and demonstrate it with clients to explain what we do at each particular workshop or journey. This includes what it involves, what theoretical pieces exist and also what some of the experiential high performing team gains look like with the client. We actually house videos of previous deliveries to clients in there, so we can demonstrate it. It gives the client a much greater perspective of what to anticipate on the delivery.”

Potentially this feels the same as a good PowerPoint slide deck, so how does it differ?

Morrissey added: “It’s basically enhanced the ability to showcase not just standardised sales decks, but actually go much, much deeper in terms of what you’re actually delivering. In the past, our client delivery was quite surface level. Whilst we know it intimately, you can get caught up in the whole explaining it as if it’s very, very obvious to the client. Sometimes it isn’t. Method Grid has given us the opportunity to lift the mist and really show what the programme delivers and what happens at each stage, so the client gets clarity on it. There’s that sort of a-ha moment, yes, that’s what we’re looking for. Without that, it’s quite difficult.”

Also, unlike a PowerPoint deck, Method Grid is serviced from the cloud. Morrissey no longer has to worry that the version of a slide deck used in a sales presentation isn’t the right one.

I asked Morrissey if there were other applications he was considering Method Grid for inside his business. He said that the HR team is also looking to leverage it adding: “We’re not 100% sure that it works. We’re playing around with it. From an HR standpoint, we house a grid in there that people can internally access any of the HR documentation for employee handbooks, outlines around vacation. We also put in there a competency framework, so there’s a Method Grid for our competency framework.“

How does that work?

“In each of those grids, in each of the elements, it basically explains what you can do at that particular competency, if you are a learner, if you’re a practitioner and if you’re an expert. They can click into those elements and go, ‘I know what I need to be doing at that particular competency in order to move from learner to practitioner to expert’.”

This sounds great but..

As with any software tool it is there to do a job. But has it actually impacted either Morrissey or his employees.

Morrissey said: “The shortest answer would probably be rather than all questions coming in about everything to me, or to the management team, there’s an ability to go and explore and probably find the answers to the question themselves. Whether it’s around internal process, client delivery or service proposition. They know that virtually everything we do, we try and house in a particular grid. It’s sort of facilitated self-explanation and self-exploration around questions.”

Morrissey was initially wary of giving any numerical impact to the benefits Method Grid has delivered. He did say: “Our conversion rate of client pitch to client win has significantly improved with the ability to show the client Method Grid, videos and articulate what the programmes deliver, there’s probably been a 25% uplift in conversion.”

What about onboarding new employees? Morrissey continued: “The ability to onboard and train, but also what we’re finding is new hires that we are training, they’re actually coming to each of the training sessions actually knowing most of the content already. They can self-help and self-teach even prior to us delivering the programme, which means it becomes a more commercial conversation rather than demonstrating something for the very first time. “

The impact on existing clients is less certain. However, it seems likely that cross selling, or rather demonstrating the services that clients are not using has become a lot easier.

Was it difficult to implement

As a beta user of the software, Pi Group will have gone through some interesting times during deployment. We asked Morrissey what it was like. He replied: “It definitely needs constant reiteration, demonstrations. People need to see completed, genuine grids.”

This is being addressed by Method Grid with templated grids, rather than having to fill everything out from scratch as the Pi Group had to do. Morrissey continued: ”I think the visualisation of a grid already filled out that you can add your own individual elements will make it a lot easier to visualise at the beginning. That was the hardest. I think once we’d cracked grid number one and grid number two, everyone had an a-ha moment of different ways we could use this.”

Is there a tip you could give to anybody looking to deploy it?

Morrissey answered: “The tip would be to genuinely think of how you could use this from a project management or a service delivery perspective. What we tend to do is we whiteboard a matrix grid before we even enter it into Method Grid. (To gain) the visualisation of (it). Have you got the right themes across the top and stages. How can they inter-correlate and how do they work, and then you start to build the grid and map it out. I think if you start it without whiteboarding it first, it can be quite difficult.”

We asked Morrissey if there was an area he would like to see improved within Method grid. He said: “If there could be some kind of Dropbox integration or ability to link files and folders. Where you’re in the element and you want to add particular presentation, it might be good to do the link into Dropbox which, again, would avoid the duplication of having to update in two places.”

Since its launch Method Grid has continuously improved the product. It is likely that the changes that Morrissey wants to see are already on the roadmap. It was how the product was built in the first place. In fact, during the initial development cycle, Dom Moorhouse, CEO of Method Grid decided to start from scratch again.

It now have a tool that delivers a way of mapping processes in a business. While some software vendors will claim that their software does this already with Sales, HR or marketing, the power of Method Grid is that it is department agnostic and does what it says. A 25% increase in closure rate is not to be sniffed at!

Can StaffCircle and IES solve The Great Resignation