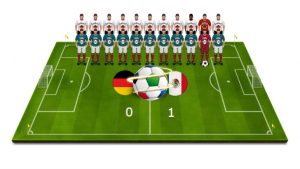 As the German football team slid to an unexpected defeat to Mexico at the World Cup in Russia, SAP announced innovations to its sports intelligence solution, SAP Sports One. SAP and the German Football Association (DFB) co-innovated a new video cockpit and player dashboard. It brings together video and match data enhancing the analytics on every player.

The video cockpit combines training and match video enabling coaches and analysts to identify weaknesses in opponents and their own team. Videos are made available to players on their mobile devices as required. These are the latest advances for SAP Sports One which enables sports teams to digitalize performance management through combining all administrative, training and team management, scouting and medical processes.

Oliver Bierhoff, general manager, German national football team commented: “We have an incredible amount of data at the German national team that we need to process and share in real time with the trainer, the players and the analysts. Artificial intelligence and machine learning play a significant role in football and are an essential part of data analytics.

“Our experts and the ones from SAP are working on these topics together. We aim to gain a competitive advantage by using the latest technology innovations and we’re glad to work with SAP as the best partner for that.”

Data Science is not enough, or is it?

It seems unlikely that Germany solely relied on data science in their preparation for the Mexico game. One of the issues with international football is that while data and videos could be collected about the individual players a lot less would have been available on the Mexican team as a whole. Data science often relies on large data sets and these just won’t have been available for SAP to crunch.

Joachim Löw the German manager said that the performance was “negligent” and “haphazard” after the defeat. Ironically, Juan Carlos Osorio credited the win on analysis of the German tactics and placing two quick players on the wings to exploit the German weaknesses.

Germany needs to improve if it is to win through the group stage. SAP Sports One will need to analyse the Sweden vs South Korea game and deliver insights quickly. The sports science products were first launched in 2014 with the SAP Match Insights solution supported by the SAP Team One mobile app. The latter allowed players to communicate and share insights with each other. Two years later SAP introduced the SAP Penalty Insights web application to assist goalkeepers with their reaction to penalty kicks. It also launched the SAP Challenger Insights mobile app. The latter provided information and insights on opponents.

Using this technology DFB won the last World Cup in 2014 and the Confederations Cup in 2017. Recent results in the build up to the World Cup have been less positive. Germany lost to both Austria and Brazil in friendlies, only beating Saudi Arabia 2-1.

The slow start will not help them in this competition. Thus the SAP solution is perhaps never more important in delivering an advantage. DFB was one of the first team to recognise the benefit that data and real-time insights can deliver. Other teams are now catching up and using similar solutions as well.

Christofer Clemens, head of scouting and match analysis, German national football team commented: “The tactical aspects of soccer have become increasingly important in recent years. This means that coaches, assistant coaches and match analysts are putting more effort into observing and analyzing the various data sources of a game.

“It is a logical step to use technological innovations – especially from the fields of data analysis, artificial intelligence and machine learning – to simplify and accelerate certain processes. Using the new functionalities of the SAP Sports One solution – video cockpit and player dashboard – allows the match analysts to prepare the coaches and players even more efficiently. Additionally, the players receive tailor-made information packages for upcoming matches.”

Data science can help to win World Cups as 2014 proved. However, there is still a number of factors that contribute to success that are outside the ability of data science. The Mexican support in the stadium for example was more vocal. Also, one cannot always predict moments of individual brilliance, both in defence and offence. SAP and DFB are working on developing the solution even further though. Artificial Intelligence will analyse video determining patterns in play that the team can take advantage of.

Stefan Ries, Member of the Executive Board of SAP SE and Chief Human Resources Officer commented: “As the reigning World Cup champion, the German national football team is at the forefront of the digital transformation across football and among the first to recognize that data and real-time insights can have a powerful impact on the field of play.

“Since 2013, the German national football team and SAP have transformed the way the team captures and processes data to inform and enhance player performance. The new SAP Sports One features, video cockpit and player dashboard, make the job of the coaches and game analysts easier, as they have direct access to the information that is essential for the team to win.”

Both Germany and SAP will hope that the team performs better in the next matches and that they are not the last in this World Cup.