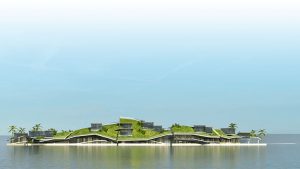 This week, scientists reported that the Antarctic was losing 200 billion tonnes of ice per year (registration required). The result is that sea levels are rising at 0.6mm per year. It might not sound much but that rate is accelerating and beginning to have an impact on land masses. To that end, Blue Frontiers is one of several companies proposing floating cities called Seasteads.

To govern these Seasteads, Blue Frontiers is proposing a new governance framework. It is basing this on blockchain and each Seastead would create its own governing framework. These would use blockchain and smart contracts that all inhabitants would sign up to. Whether this would be enough to make them independent states or how each would incorporate national laws as part of a country is not clear.

As with all legal and governance systems there will be disputes. To deal with this, Blue Frontiers has chosen Kleros and its Justice Protocol to provide a dispute resolution system.

Blue Frontiers has laid out how the arbitration process it has agreed with Kleros would work. There are four steps:

According to Randy Hencken, Co-Founder of Blue Frontiers and Director of The Seasteading Institute: “Our Seasteads are specifically designed to facilitate innovation in how humans choose to model habitation, form communities and govern their affairs. By adopting the pioneering objective arbitration protocol developed by Kleros, we will allow our communities and the ecosystems they interact with to settle disputes fairly, securely and efficiently”.

The combination of blockchain, smart contracts and an arbitration system is something that is being used elsewhere. Applying it to this type of environment is interesting and innovative. However, it does raise questions. No island exists without interaction and dependence upon another. Seasteads will be no different in that sense. They will need to transact for goods and there will be questions of currency and fiscal issues to be resolved. This is also where blockchain and smart contracts could be used.

Will Seasteads aim for independence and become a unique country? If not, how will they incorporate of laws of the country to which the Seastead is connected into its smart contracts? Would any Seastead citizen have an appeal, beyond the smart contract to a government or Supreme Court?

In reality, it could be that these governance measures are no different to many homeowners association contracts. However, these are far from perfect. The use of the Kleros Justice Protocol appears to be a way to avoid any one group dominating the governance of a Seastead. It will be interesting to see how this develops.