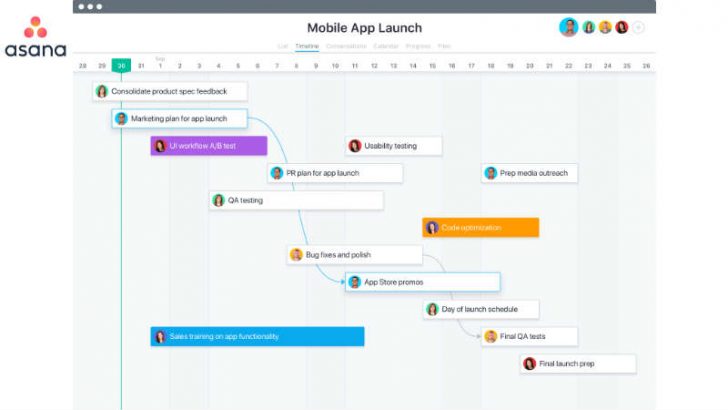 Asana has announced new functionality for its work management software. Timeline enables managers to graphical view and allocate people against different tasks. The new module is included with the premium version of Asana, priced at $9.99 per user per month.

The new functionality appears similar to an interactive Gantt chart. Within a “project” users can define individual tasks, their proposed start and end dates, and allocate an individual to fulfil that task. The initial view is on the basis of a list and displays the priority and status of the task.

Timeline graphically displays each task on a calendar view along with the person allocated to it. The tasks are colour coded so that current progress is easily recognisable. If there is an allocation conflict, this is highlighted by a thin red arrow that demonstrates the dependency for an individual is compromised. The manager is then able to drag the task to a new date removing the dependency. Subsequent tasks can be adjusted until the plan is on track again.

As work is updated, if it overruns or finishes early, the manager can adjust the plan as the project progresses. Thus, if a task finishes early the plan can be quickly adjusted to reflect the change. If a task overruns the impact of that on the overall project is quickly seen.

Setting up projects is also easy. Create the tasks, their duration and allocated person first. The manager can then drag these unscheduled tasks into the timeline. This allows a project plan to be developed using the graphical interface in far less time than was previously possible.

Grace Jordan, Senior Brand Marketing Manager commented: “Timeline takes our complex plan and lays it out in a visual way, without any additional work. It shows my team, and the rest of our organization, how everything fits together. Plus it stays up to date, so I don’t have to spend my time updating PowerPoints or drawing new plans on whiteboards whenever something changes.

“With Timeline, our team is more dynamic, and we’re more confident that our plan will be a success.”

Is this a complete solution?

No. While this new functionality is loved by the early adopters Asana has some questions to answer around it. There are improvements that it could make. It appears that only a single person can be allocated to each task and dependencies are people rather than task dependent. One future enhancement to consider might be the automated re-scheduling of tasks based on a change of scheduling.  At present, conflicts only appear to be highlighted. An automatic draft re-allocation of tasks would be a useful improvement. For complex projects with many tasks this would potentially save considerable time.

For companies that need a work management tool to manage projects such as product launch plans, marketing campaigns and event plans, Timeline is a useful addition to Asana. Users can quickly create projects, map them against a calendar and adjust in near real-time to ensure completion.