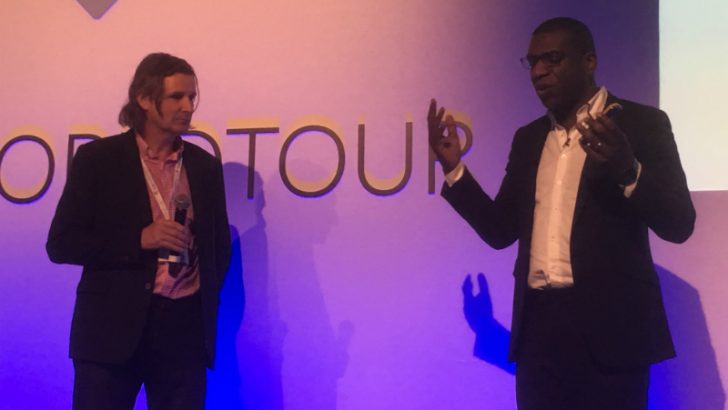 At the latest stop in the Box World Tour, Box announced the signing of a MOU (Memorandum of understanding) with BT. The partnership will see Box customers take advantage of Cloud Connect. Box are the latest cloud vendor to become a member of a fairly exclusive club.

A year ago BT added Salesforce to the private cloud ecosystem that they have built. Other users of that private cloud include cloud giants such as Google, Azure and AWS. Speaking on stage during the keynote Steve Masters, Vice President of Customer Innovation at BT’s Global Services division said that Box joins Salesforce and Office365 as the products that are not part of BT’s Cloud of Clouds.

Masters added: ”It is BT ‘s function as the cloud service integrator to use the power of the network to connect all of those organisations together all of those cloud instances together in a robust and secure fashion. To give the right level of quality whether it is public internet or private networks.”

UK customers to get data sovereignty

The deal allows BT to deliver private mpls connections into the recently announced Box UK Region. This is being hosted by IBM SoftLayer in their London data centre, part of a deal Box announced with IBM last year. According to David Benjamin, Box SVP and GM of EMEA this new region should be live in Q2/late spring 2017. Box will use the existing Frankfurt data centre as backup. Benjamin believes that this delivers competitive advantage over rivals whose secondary data centre is outside the EU.

Enterprise Times spoke to Benjamin after the announcement about the benefits for Box. Benjamin answered: “We want to achieve a couple of things. The first one is that BT has great relationships with global multinational companies. I have been very surprised by the high degree of commonality between multinational companies that are already with Box and who are customers of BT as well. That’s a great opportunity for Cloud Connect. Putting a pipe between BT and the customer, then BT and Box. BT call it Cloud Connect, Where we have common customers they will see an instant improvement in compliance, security interoperability and uniformity. This creates our differentiation.

“The second thing is that we will look to co-sell with BT as well. We are working through what that will look like and we will make an announcement in a couple of months in terms of how the MOU is solidified into a formal agreement.”

BT believes that there is good traction with Box for its customers. They should benefit from additional revenues as companies look to secure their network. This will help Box get deeper into organisations concerned about security on the public internet. Box are about to set up an office in Germany and already having one in France. It will be interesting to see whether similar agreements are reached with Deutsche Telekom and Orange.