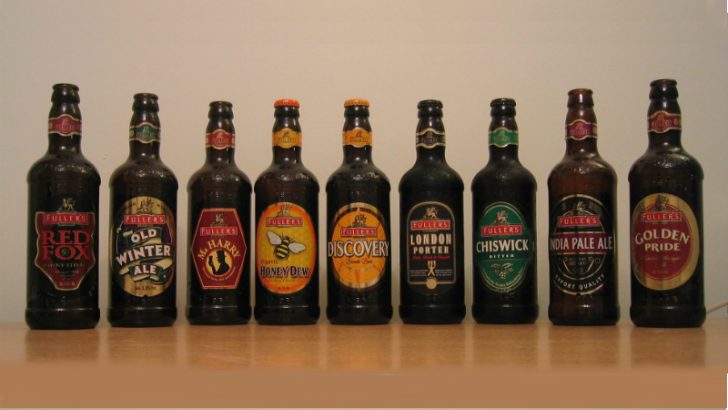 Fuller’s, one of the oldest surviving breweries in London, is welcoming in the digital age with the help of Infor. They are implementing Infor CloudSuite Food & Beverage as a cloud based solution. They will also implement several other Infor solutions alongside this.

Brewing is one of the oldest crafts in the world. The earliest evidence dates from chemical analysis of pottery jars 7000 years ago. One of the oldest artefacts is from 2050BC, a beer receipt on a stone tablet found in Ur.

Times have mostly changed since then and for the last 20 years Fullers have used a legacy ERP solution. Enterprise Times spoke to Bronwen White, IT Development Manager at Fullers about the project. White has worked on the project since its birth when Fuller’s decided that they needed a new system. White explained: “Fullers are more complex now than we were. We have more products, more companies more locations, a large number of warehouses. We have more complexity than we ever did and that will increase. Finally, we want to be agile for the future and we want to be more efficient.”

An example of that efficiency improvement is replacing the beer receipt paperwork (oddly reminiscent of the Sumerian process) with a mobile device using sign-on-glass ePOD technology. The project was sponsored by James Douglas, Financial Director at Fullers. It involved key stakeholders from the business including Simon Dodd, Managing Director, Fullers Beer Company. For White this executive support is important to the success of the project. She wisely decided to involve the business throughout the process.

Once Fullers had made the decision to replace their ERP, White was given the role of project manager. This is not a small project. The intention is to replace most of the business software in use by The Fuller’s Beer Company. It includes the beer brewing and the cellar services it provides. It will have less impact at Fuller’s Inns but will still replace the core finance solution. Replacing the hospitality system already in place was out of scope.

White turned to Lumenia, a management consulting firm that specialise in the selection and implementation of ERP and CRM solutions. They went through a diligent process over a twelve month period. This includes collecting business requirements, selecting a long list of eight firms and then whittling that down to three finalists. Those three demonstrated their software to key stakeholders in the business, each spending two days to do so.

The whole process took around 12 months to complete. We asked White whether there would be anything she would have changed in the process. She said: ”We needed to take the time to do the due diligence. If I could have done it quicker I would have done.“ This is always the dilemma for project managers running such a large project and in some industries it would have been too long. The risk is that by the time a solution is chosen, based on assumptions made six months previously, it is no longer the right solution for the company. In Fuller’s case the industry and business is not evolving as rapidly as others. This meant the requirements were therefore broadly unchanged by the end of the selection process.

In the end Fullers chose Infor solutions. These include Infor CloudSuite Food & Beverage, Infor Enterprise Asset Management (EAM), Infor Contract Lifecycle Management (CLM), Infor Customer Relationship Management (CRM), Infor Dynamic Enterprise Performance Management (d/EPM) and the Infor Xi platform. White explained that Infor was selected for its breadth of functionality, its integrated approach and that Infor consulting services would deploy it themselves. Alongside the Infor project Fullers also reengaged with Lumenia who will help them project manage the extensive and concurrent change management project. White believes that they want to keep the system changes separate from the change management processes. This is an interesting call and one that not every company will make.

The integration provided by Infor Ion, part of the Infor XI platform, is key to the deployment. According to White the project will be phased over 12-15 months. However, she is keen to keep the momentum created by the selection process to help drive the project forward. White added “Core finance is the main priority to start with. The rest are still in planning, with the more peripheral modules to follow.”

In phasing the project the business and its employees should see changes start to happen quickly. This should enable White to keep up that momentum and enthusiasm for change within the company. This is where the change management process will need to align with the system changes and Fuller’s will need to consider how to align the two projects together. The initial phase will see approximately 130 users going live on the core finance solution. Once fully completed Fuller’s will have 500 users in total using the solution.

This phased approach is possible with the use of Infor XI to integrate with the existing ERP solution as the project is rolled out. This may create more work but it helps to lower the risk the project failing. There are still risks and White explained the three key ones: ”Testing, we have to get the testing right, the Data migration and the People, we have to take the people with us.”

There was no order of importance to those risks though White mentioned the issue of people and bringing them with her on the journey several times. For many ERP projects they are the key concern as it requires softer skills including effective communication to manage. Infor Ion will also be used to integrate with other key systems that are not being replaced, such as HR and the main EPOS system in use, Zonal.

Bringing Fuller’s into the digital age is critical to the overall success of the project. White explained further: “That digital element is very important to us. Currently we manually enter our invoices, but as part of the system we will have some text recognition software . So we will scan them and the system will load them automatically.” This OCR capability will also be used in Infor CLM for both sales and supplier contracts.

It is not just the administration that will benefit though. White said “Core to the project we want complete traceability of our products electronically. That will include barcoding of all of our products and sign on glass as part of the delivery”

This introduction of barcode readers in the warehouse will not only speed up operations but will reduce the risk of human error in transcribing information. For deliveries this will also cut down the time required on site.

Was IoT part of the EAM rollout at Fuller’s?

The deployment of IoT (Internet of Things) sensors is not part of the project. According to White this was out of scope of what already was a large project. However she was aware that Infor can easily integrate its EAM product into IoT at a later date.

EAM is crucial to the project though and will see uses across the company. White commented that: “The main core usage will be our managed estate. Our Contractors go and fix kitchen goods, for example; fridges and ovens. We are also responsible for the managed properties, this includes roofs and drains. We would like to manage our assets and our contractors.”

The helpdesk solution as part of Infor CRM will allow Fuller’s to record and track issues through to completion. This functionality will also extend to cellar services. EAM will track and manager equipment, including coolers that are provided to both customers and the tied estate. EAM will be used for the transport fleet and plaint maintenance.

As part of the diligent selection process, business benefits were collected for each of the departments and will form the KPIs for the project. While White was unable to share these she did answer what the brewery customers and tied managers will gain from the solution. She said: “They will benefit from all of their financial reporting Infor delivers It will be far more quickly accessible with drill down capability added. At the moment their reporting uses PDF documents. Log asset management will improve and the purchase ordering process will improve.”

For consumers, the beer drinkers, White believes that once the solution is implemented the quality of the beer should improve. They should be able to bring more products to market.

Fuller’s are embarking what is a major overhaul of their ERP system. After the diligent planning and selection process that White has completed the project has started, the 15 month completion may seem ambitious. With the right team, Fuller’s are currently interviewing the consulting team that Infor are looking to provide, it should meet this target. Those interviews are more about cultural fit than technical knowledge which is probably a given. It will be interesting to hear whether any of the new Infor employees that were part of Ciber were included.

Stephan Scholl, President, Infor commenting in the original press release said: “For a company such as Fuller’s, steeped in a history going back to 1845, a digital transformation project is all about ensuring not just the next year or two of success, but laying foundations that will last decades. The size and scope of this deal shows the level of confidence businesses now have in cloud and how it is a core part of their plans for the future. This approach is a hallmark of those companies that are not prepared to dwell on traditions, and as such, will continue to grow and dominate markets.”

Fuller’s are using M3 in the AWS hosted CloudSuite that Infor provide. They will be one of the early adopters of this M3 cloud and once live should be the destination that many UK CIO’s will want to visit for their references! In little more than 15 months times CIO’s should be able taste whether this ERP project has delivered on its promise of better tasting beers!