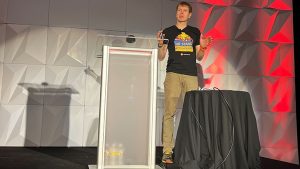 Open source software makes up a substantial amount of the software in use today. But expectations of what open source means are changing. It is time for companies to take a close look at what they are using to see how open source it really is. That was the opening message from Peter Zaitsev, CEO and founder of Percona when he took to the stage at Percona Live.

Zaitsev started by asking, “What is the biggest factor impacting open source now?” It’s an interesting question. One factor is the impact of the cloud as a deployment platform. Pointing to a Gartner blog, Zaitsev showed how DBMS revenue between cloud and on-premises had shifted since 2017. Cloud has gone from being around 15% of the total DBMS revenue in 2017 to 49% in 2021. In 2022, Zaitsev says the cloud will become the biggest deployment platform for databases.

That shift to the cloud has come with unexpected changes. The cloud vendors want a greater slice of the revenue and that has impacted open source DBMS licences. Many open source vendors are changing their licence terms to ensure a revenue stream from open source. The licence landscape has shifted from open to permissive over the last few years. For DBMS users, that means that open source may no longer mean free to use and pay for services.

But who is making the money? According to Zaitsev, if you look at MySQL, Oracle has the most engineers but AWS is making more money. This raises another question. Should open source be a business model? There is no doubt this is an emotive one as witnessed by the reactions of some people at Percona Live.

What is key here is that open source, at least according to Zaitsev, is capable of supporting multiple business models. He sees the industry breaking into two different models:

The slippery slope from open source to proprietary

If vendors are changing the licence to make them more restrictive, does that make them any different to proprietary software? Zaitsev says no. He sees such a move as meaning a company and its products are no longer open source.

It is not just changes to the licence that are the problem. Adding proprietary features to open source also acts as a lock-in to a vendor. Unix is one of the biggest examples of this. At its height, there were tens of companies shipping Unix on their hardware. The problem is that you couldn’t just take that Unix image and use it elsewhere. That was because of the proprietary code each vendor added.

The same is happening with the cloud and the way vendors are using services to lock users in.

But there are ways to solve this. For Unix, it was the development of Linux that created a better standardisation. For the cloud, the emergence of the Cloud Native Computing Foundation is playing its part. It sees the cloud as just a commodity platform and it shouldn’t matter whose platform that is. What is important is that code is written once, is open and can run on any cloud platform.

Despite all of this, Zaitsev emphasises that he is not anti-cloud. His issue is the way that open source is being redefined in such a way as to not be open.

What is the future for databases?

It would be easy to take some of Zaitsev’s comments out of context and see the idea of open source database-as-a-service (DBaaS) as being dead. That is clearly not the case. While the cloud vendors are keen to monetise well beyond the commodity platform there are changes coming.

Some of those changes are coming from the industry itself. Percona has made it clear that its latest product, Percona Platform, is available to everyone. There is also an interesting shift in how databases are deployed. Containers are now becoming increasingly used for code. They are also being used to hold databases and that is where things get interesting.

By using containers, Kubernetes and Docker, the databases can be moved across cloud platforms. The portability they gain delivers benefits to end-users, developers and operations teams alike. Zaitsev said that Percona is already seeing databases as the number one app running on Kubernetes. In addition, many of the DBaaS offerings that are out there also use Kubernetes underneath.

The definition of open source has always been in flux, as has ownership. Many companies like to see their community contribute to the product but are then happy to monetise it without payback. Much of that monetisation has been through services, allowing vendors to say there were offering something different. However, many have also ended up with split distributions where community editions differ substantially from enterprise versions.

What is happening with cloud vendors and databases was an inevitability. Taking the open source code and adding in their own twists was sold by cloud vendors as making it work better. That it then created a proprietary fork of the software was seen as incidental. It is not as simple as saying customers should not use those additional services and features if they want portability. That argument was first proposed in the 1980s around Unix and failed then. It still fails.

Of more interest is the use of containers to create cloud portability for DBaaS. It takes away the cloud vendor lock-in and gives customers more flexibility. That Percona is seeing it happening more regularly is good news. The question now, is can it reshape the open source database market?