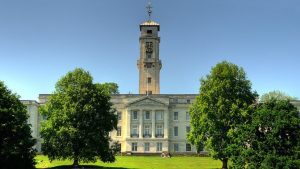 The University of Nottingham has awarded a £29.75 million deal to Evolutionary Systems Company Limited (Evosys), subject to council approval. According to an article in the Register, the deal is a blow to Unit4, whose software was only updated in 2019. With the original tender value estimated at £35 million and the primary consideration being price, this is a good competitive win. It sees the Oracle footprint across Nottingham increase. EMSS, which provides services to Nottingham City Council, announced they would deploy Oracle cloud software in 2018.

The project will replace 41 different systems at the university with Oracle’s HR, Payroll, Finance and Procurement solutions. It is part of a wider digital core project undertaken by the university.

One example of the consolidation will see absence management moved onto a single solution with different parts of the university currently using different solutions.

Lisa Dearing, School of Humanities Assistant Operations Manager, gives an insight into why the university selected Oracle, saying: “It should be an easy-to-use solution that supports colleagues in their roles. I’m glad that we’re involved in the Digital Core project from the outset. This means we can identify and mitigate any potential issues before the software solution is rolled out.”

The original tender was presented to eight interested bidders, with four moving through to the contest’s final stage. The process took around 11 months, commencing at the start of the year with a requirements gathering phase. The contract duration was for 10 years though this was not confirmed in the award details.

Evosys is planning to commence the work in April 2022. This is a month after the council is set to approve the procurement. According to the University of Nottingham blog, the software should start going live later in 2023, presumably before the academic year starts.

Evosys is no stranger to university deployments and has worked with the Open University and the University College of London Hospitals in the UK. It has also deployed a similar Oracle solution at the Technical University of Denmark.  In total, it has worked with more than 50 universities worldwide.

The higher education sector in the UK is fiercely competitive. Oracle, Unit4, TechnologyOne and several other companies all have ambitious plans for the sector. This latest win at a Russell Group university is a coup for Oracle and Evosys. It is also a blow to Unit4 and Zellis.

The university currently uses Unit4 for Finance and ResourceLink, from Zellis for its HCM and Payroll solution. While the tender may have been won, Evosys needs to deliver on its promised timeline and within budget.

Does Oracle have the upper hand in this sector heading into 2022? It will need to watch out for Unit4 as the incumbent on many future bids. Also, Technology One, who may have been in the final four. It might not have a big presence in the UK yet to provide sufficient references for such a large prospect though. However, it will seek to grow its footprint over the next few months. They could be a serious contender against Oracle and others.