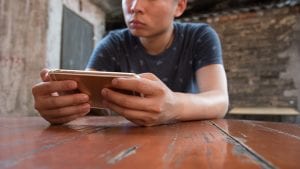 Research by App Annie reveal consumers spent $32bn on in-apps purchases across iOS and Google Play globally in Q1 2021. This is the biggest quarter since records began – and the figure is 40% increase on the same quarter for 2020.

The numbers illustrate the remarkable impact that the pandemic has had on the app market. Q1 2020 was the first period of global lockdowns. Stay at home orders forced consumers to seek out indoor stimulation. Consumers found it on their smartphones, through games and other engaging apps such as video streaming and social sharing platforms.

As a result, the market grew at unprecedented speed. Smartphone users spent around $9 billion more on apps and games in Q1 2021 than they did in Q1 2020.
The growth in Q1 2021 was shared equally by the two platforms. Consumer spend grew 40% year on year to $21 billion on iOS. The same percentage year over year to around $11 billion on Google Play.

Total downloads also grew significantly. Downloads on both iOS and Google Play combined rose by around 10% to 31 billion in the quarter.

Global stay at home orders meant that some app categories outperformed others over the quarter. On Google Play, spending on games, social and entertainment saw the strongest quarter over quarter growth. On iOS, the largest categories by growth were games, photo & video and entertainment.

The best performing categories by downloads were slightly different. On Google Play, social, tools, and finance enjoyed the biggest growth. However, there were strong showings from weather (40%) and dating (35%). On iOS, the biggest gains were recorded by games, finance and social networking. However, the most eye-catching move was health and fitness. Downloads of these apps rose 25% as consumers look for new, interactive ways to keep moving while staying at home.

The list of the world’s most popular non-gaming apps is populated by the expected evergreen products. TikTok, YouTube and Facebook were the top apps by downloads, consumer spend and Monthly Active Users (MAU). However, the breakout chart of apps that gained the most quarter-over-quarter growth reveals some interesting insights.

It’s telling that Signal, a privacy-focused messaging app, was the quarter’s fastest-growing app by downloads and MAUs. Telegram, a similar type of app was at number 3 and 2. The other notable breakout app was MX Takatak, which serves the growing demand in short user-generated video content in India. This is part of the current trend of rapid growth of home-grown publishers. According to App Annie estimates, it was the fastest growing app by downloads in Q1 2021.

In Q1 2021, as ever, gaming proved to be the most influential category in the overall app market. Gamers downloaded around a billion titles every week in the quarter, while total consumer spend on gaming hit $22bn. iOS gamers spent the most at $13 billion (up 30%), while gamers spent $9bn on Google Play (up 35%).

The growth in downloads was less pronounced, but still impressive. In Q1 2021 gamers downloaded around a billion games every week. This is 15% up on 2020, and 35% up on the weekly average for Q1 2019. Google Play game downloads grew 20% year over year to 11bn.

The quarter’s most downloaded game was Supersonic Studio’s hyper casual survival game Join Clash 3D. It swapped places with Among Us! at number 2. There was less change in the games charts by spend and monthly active users (MAU). Genshin Impact remained the second most successful titles by consumer spend, after securing top spot in Q4 2020. The continuous success of the title further exemplifies how far mobile has gone  to offer console-quality experiences. Game publishers are increasingly prioritising mobile as part of their platform of choice to expand their user base.  Providing regular content updates such as additional characters and quests which further boost engagement and in-app-purchases.

The pandemic accelerated the growth in mobile gaming with game downloads outpacing overall downloads by 2.5x in 2020. In 2021, mobile gaming is set to reach $120 billion in consumer spend, 1.5x all other gaming formats combined.

Donny Kristianto, Senior Market Insights Manager, App Annie advices, “Mobile gaming at record highs as we head into Q2 2021. The pandemic accelerated this growth with game downloads outpacing overall downloads by 2.5x in 2020. In 2021, mobile gaming is set to reach $120 billion in consumer spend, 1.5x all other gaming formats combined.”

The app market is getting bigger – and it’s growing at a faster rate than ever before. Needless to say, this makes perfect sense. COVID-19 pandemic has forced large numbers of people to stay in-doors. As a result, in-app purchases rose 40% to $32 billion as people sought to entertain themselves during lockdown. Video streaming, social apps and mobile games performed particularly well.

Mobile gaming business is a serious industry. Mobile gaming strategy — product development, partnerships, international expansion, user acquisition, marketing, monetization and retention — is more important than ever before. Gaming publishers need to have a clear view of the market and the road ahead. This particular report provides a very useful insight into the marketplace.