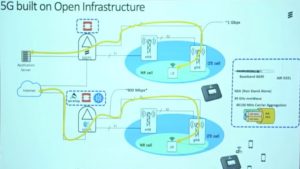 At the Open Infrastructure Summit in Denver, the love affair between telcos and the OpenStack Foundation (OSF) continues to grow. Ericsson and AT&T both talked in the keynote about the importance of Open Infrastructure to their deployment plans. AT&T has been a long term supporter of OpenStack and in Berlin last year announced its 5G plans.

Those plans are now in full flow. December 2018 saw AT&T deploy its first 5G network. It is using OpenStack, Airship and Kubernetes. That combination allows AT&T to deal with one of the biggest challenges of 5G, the increase in infrastructure required. This is because the frequencies that 5G uses, requires a greater density of base stations and masts.

That greater density allows for more flexibility in the network. It allows a carrier, for example, to dynamically deploy technologies based on demand. Think rush hour and the need to cover key routes in and out of cities. Alternatively an event in a city where there will be a significant influx of users into a small area.

The power of Airship to deliver a containerised environment

To do all of this, AT&T is relying on Airship. It has been in use by AT&T since late 2018. It has now released v1.0 and been promoted to pilot project status by the OSF. For AT&T, this just confirms their belief that it is the right tool for deploying and managing its Network Cloud.

AT&T says that the reasons for choosing Airship is that it delivers:

In addition, with Airship, AT&T is able to have repeatable multi-site deployments. This means it can take all of its software defined infrastructure, and have it deployed in containers wherever and whenever it wants. It can deploy new 5G locations with ease and because Airship will deploy onto bare metal, AT&T does not have to worry about updates or incompatibilities with different pieces of software. It simply allows Airship to flush the hardware with a complete new set of containers.

More than just a telco solution

This ability to deploy critical infrastructure dynamically and at scale is about more than just the benefits to a telco. There are many other areas where 5G is going to be essential if the technologies are going to work.

In automotive, there are several complex challenges to overcome if autonomous vehicles are to be delivered. This includes highly dense networks with each vehicle delivering GB’s of data per day. That requires highly dynamic and flexible networks where applications and core software components can be deployed on demand to meet demand. For city centres this means refocusing networks when there is traffic congestion or accidents. Autonomous does not eliminate either of these.

Away from automotive, Smart Cities will require dynamic control to deal with management and incidents. This means access controls, data gathering, management of IoT networks and many more areas. The software to do this can be deployed in containers but without a core network able to deliver those containers and reconfigure itself as required, many of the proposed benefits will be minimised.

It is easy to get carried away with slick demos and early projects. What AT&T is doing with Airship, OpenStack and Open Infrastructure is interesting and even exciting to many. However, it is not yet a guaranteed solution to other complex projects even if they do sit on 5G.

Over the next year, it will be interesting to see how many other telco’s adopt Airship and how quickly it can evolve. There will also be a lot of attention on AT&T’s 5G network in particular its deployment and performance. For now, this is a great start and one that promises a lot.