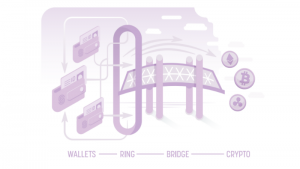 Shyft has unveiled Byfrost as a bridging technology at the heart of the Shyft Network. The latter is a global decentralised network which seeks to enable organisations, institutions and individuals to prove and verify identity credentials and ownership rights.

Shyft Co-founder Joseph Weinberg: “This deployment represents years of careful consideration and development by teams around the world. The next phase of our ecosystem will be based on real-world applications and solutions to problems that are fundamental to both the traditional world and the new one being built in the blockchain space today. Interoperability, the establishment of regulation as a protocol, and better standards around how we ensure privacy while enabling transparency in situations that require explicit trust are the next set of base layer requirements that our ecosystem needs to continue to permeate into traditional environments and to enable mass adoption. These are the enablements that Shyft and Byfrost are bringing to all ecosystem and public and private networks infrastructures today.”

Byfrost enables the creation and routing of synthetic assets across multiple blockchains as well as on-chain asset custody and management. Through its associated ERC-20 token, BFST, the bridge will support the conversion and cross-chain transfers of native tokens like:

Byfrost monitors network activity in search of malicious behaviour. It has the ability to slow down or pause block validation if it detects a serious threat, such as an attempted 51% attack. It also facilitates interoperability with external networks.

On the road to Shyft Mainnet (see below), Shyft has deployed Byfrost and its associated token BFST to showcase Shyft’s bridging cross-protocol functionality for asset transfers. Byfrost acts as both a gate and gatekeeper; ambassador and guardian which:

Shyft is a proof-of-sender protocol and credential verification network. Its purpose is to enable organizations, institutions, and individuals to prove and verify (in real time and at scale):

Shyft is a distributed, multi-layer blockchain-based network enabling users to securely obtain, store, inquire about and work with regulatory-compliant data. It seeks to:

Shyft also features a ‘creditability’ system. The aim is to provide consumers with a reputational score based on compliance and historical transactional activity. Such an approach has particular relevance for the unbanked.

Diego Gutierrez, CEO of Rootstock and Shyft advisor: “For many years I’ve been sharing the vision of how Bitcoin was the cornerstone of the Internet of Value, but in order to thrive, this new Internet needs upper-layer protocols that fulfil the core needs of the financial system of the future. By building an interoperable KYC between blockchains, Shyft is taking this vision one step further and facilitating key use cases like international trade and financial inclusion.”

The Shyft Network is a combination of:

The Shyft blockchain features a smart contract compatible architecture. Running simultaneously on the Shyft Bridge and Shyft Ring this is based on the Ethereum blockchain’s codebase with the modifications to the Ethereum consensus engine:

All other aspects of the Shyft Network’s primary security models closely follow the Ethereum model. As the Ethereum codebase evolves, Shyft says it will incorporate technical changes to improve its network.

Recent developments in financial technology are increasingly requiring finance sector participants, including regulatory bodies, to adapt. If they do not, they risk disruption and/or catastrophic failures (q.v. the threat of immense fines for terrorism financing). In consequence compliance obligations for financial institutions are increasing in number, complexity and rigour required.

At the same time the costs of satisfying such obligations rise and rise. Anything less than strict compliance can result in significant legal penalties and/or reputational damage:

In effect, compliance has become a business threatening requirement. Without it fines may drive a business to the wall. But satisfying regulators has significant costs with practical implications.