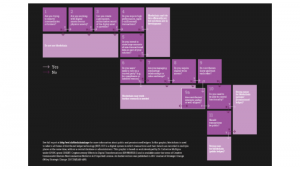 Globant, an IT services company, has published a short (12 page) report entitled ‘The 2019 Blockchain Business Guide‘. Based on a survey of 679 US senior-level decision makers in IT or operations or marketing, this is not an introduction to blockchain technology. Rather, it describes aspects of blockchain which Globant believes those involved with IT should consider as part of their business planning. It includes a decision tree for deciding whether and how to use blockchain.

A key differentiation is made between the CTO and the CIO. “For example, CTOs and CIOs have very different experiences exploring and thinking through blockchain, which leads to (a) disparity in their goals for the technology. On the information side, a higher familiarity with tech hurdles leads to risk aversion, despite enthusiasm for blockchain among CIOs. Conversely, CTOs hear about blockchain often, which can push them to quickly determine a use case for the technology, regardless of potential hurdles.”

Various questions in the report revealed insights into enterprise thinking and the state of blockchain.

Asked where organisations are, in terms of buying blockchain:

A different question asked how much time individuals ‘wasted’, on a daily basis, on tracking down digital information:

Put a different way, 90% of enterprises or organisation employees (not organisations as described in the report) “waste time daily’. Perhaps the only comments to make here are:

The report expends an early part of its content arguing that there are five terms which people should understand before any blockchain-related conversation. The point Globant makes is that those at any decision-making table should not be inhibited by ignorance (or fear) from asking questions or seeking out additional information – because of a reluctance to reveal their lack of blockchain expertise.

An asset is a record, whether tangible or intangible, that the digital world can describe. Assets have ownership and possess unique attributes which serve as high-level definitions. Assets may also have broader sets of attributes linked ‘off chain’ (where ‘off chain’ refers to transactions that occur beyond a blockchain network).

Nodes are the glue holding a blockchain network together. Individual nodes are the workhorses which perform:

The ledger is the set of all transactions representing the changes of the current state of an asset since the inception of the blockchain. Every transaction records. As this history is immutable, the ledger serves as the record of events around an asset, which requires permission for viewing. (Every node helps accumulate the information about an event and occurs in a decentralized way).

Actors (or participants) allow a blockchain system to recognize authorised individuals to view and/or modify an asset. Actors are equivalent to a group of users within an institution or organisation.

That participants in blockchain discussions should be aware, even cognisant with, such terminology is a valid point. Ledgers are a blind spot for most unfamiliar with accounting. Digital electronic ledgers together cryptography introduce add many possibilities for confusion and/or ignorance.

At the end of the report, Globant opines: “Your company is unique, and your blockchain should be uniquely yours, too“. While gooey in sentiment this is accurate. Blockchains are specific to each use case. They are not a spanner or monkey wrench for all situations. They need focus.

A second point made is that “blockchain has the power to democratize ownership of virtually any type of record and build trust around sharing that information online. While there’s a hesitancy to think of technologies and their associated data as personal property, this perspective is changing. The U.S. Supreme Court recently ruled on what it means to buy technology, and the decision puts greater power in the hands of individuals. So too does blockchain — and that’s great for organizations. Legislation is moving in this direction to account for our increasingly digital world, and exploring blockchain now can help your organization be the one that champions this trend in your industry.”

The Globant report is not heavyweight, nor is it long. It makes practical suggestions. In a blockchain world both are sufficiently unusual as to warrant attention.