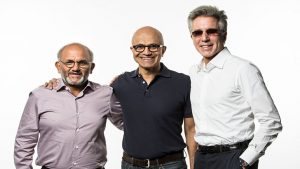 I just love being taught to suck eggs. And I say this with only the feintest glimmer of a smile upon my now ageing face. I say ageing because I’ve been around technology for a long time now – as illustrated by the lines burrowed deep into my forehead. Over the decades numerous IT companies have announced their latest and greatest strategies to me. Some good, some bad and some deserving of a 2-minute silence as they arrived and died.

It was therefore with interest that I poured over the contents of a keynote speech delivered by Microsoft CEO Satya Nadella. Back in late September at the firm’s Ignite event he caused my ‘oh dear me’ alarm to go off. How you may ask? He used the term digital transformation. I have always hated this one and here is why:

We work in a world of computers and they have been around for a long time now. So, does that mean that for 30 plus years now we have been in an analogue transformation? Is it not time that we stopped spouting this gibberish!? We have been going through a digital transformation since digital devices first appeared.

OK, so I suppose I should be fairer to someone like Microsoft’s Nadella. After all, he is employed to inspire folk with his words. And so, it is with the greatest of respect that I would ask him to try harder to inspire and stop recycling stock pulp such as digital transformation.

But let’s get to the bit of the keynote that really got me going – the Open Data Initiative. This is where things got frankly rather… sad. Nadella brought up two buddies on stage to talk about ODI and these were SAP CEO Bill McDermott and Adobe Systems CEO Shantanu Narayen.

In the PR shot taken of the three CEOs they looked like an ageing music trio from the 80s that had gotten together for a final tour. I will continue this analogy if you don’t mind, as it is quite fun. Once upon a time the songs from the trio were fun, distinctive and, if I dare say it, risqué! But like all sad farewell tours the originality had gone. The music they now make sounds almost bland in comparison to the exciting noise the younger bands are generating.

Apparently, and you may need to be seated to hear this, the trio tell us that: data is a company’s most valuable asset.

Well what can I say… here we are in 2018 and finally this trio of CEOs has told me about how important data is. Shame I blinked and missed that. It is almost as bad as the Tory Party telling me that austerity is over in the UK. I nearly missed that one too!

Let’s look at some choice nuggets from the ODI press release about what this initiative is all about:

Err, what a wonderful collection of words. Back in the 1990s in the UK, several tech writers used to attend events and play a little game between themselves called ‘Buzzword Bullshit Bingo’. It helped us wile away the tedious hours of keynotes and briefings. As I read the ODI press release I realised that I had just won the 2018 version of the game.

And after reading and re-reading the ODI press release it became clear that once again the same old stuff was being churned out to us all again. The same dialogue about applications and data silos and customers and real time experiences.

We get it. Mobile devices, connectivity and customers now tech savvy with their powerful smartphone and tablets. Users expect their online consumer experiences to be just as cool as their home experience. Then add to this the complexity of a big enterprise, such as a large retailer which wants to look at a single view of their customer data. As this style of company moves to be savvier about how it deals with said customer, to take their money off them and to retain their buying loyalty, managing a myriad of data is indeed critical.

But this is nothing new. Our three CEOs make it sound like they woke up one day and had a eureka moment! Sure, the landscape is different. Customers buy online in droves, they still use retail outlets. Of course, they check out a firm’s Facebook site and complain or praise via Twitter.

As with all data sharing initiatives, privacy is now the major issue. Companies might have oceans of data, but can they anonymise effectively before sharing? In fact, anonymity would defeat the whole purpose of this approach, so just how are user rights being protected?

If user data is to be shared, then it is time for a grown-up approach and rethink of how it will be used. Getting consent is now an imperative, but what about deleting that data if consent is withdrawn? It will be very interesting to see how this proposed data approach manages a user’s data. I mean, what happens when data is deleted if a user changes their mind? In addition, what if the user wants a copy of their data? Once shared, who is responsible for that data? Will they all have the robust systems to protect it? Evidence from other projects suggests this will be dealt with “later” – except, as often discovered with cyber security, later often never comes.

What’s it all about?

I did wonder what drove these three leading IT players to get all excited and I postulated that it could well be driven by customer overlap. In the ODI release the firms rolled out some nebulous endorsement quotes from Coca Cola, Walmart and Unilever. So you could hazard a guess that they have other big players overlapping their data silo stories.

As it stands right now ODI is an idea. A concept and I guess a stake in the ground for how Microsoft, SAP and Adobe see data management by companies. Together these firms give us the likes of Microsoft Azure and Dynamics 365, the Adobe Experience Cloud and Adobe Experience Platform and SAP C/4HANA and S/4HANA.

ODI is therefore a cool idea if your data platform embraces the above. Not so good if you have your colours pinned to something like Oracle Cloud or another ERP platform or a CRM like Salesforce.com. This leaves me wondering who else our ODI trio will look to sign up to their venture.

The ODI needs to have more players and after all, three is hardly a crowd.

Further Consolidation in the Edtech market as Ellucian grabs CampusLogic