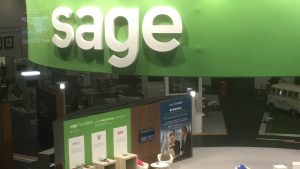 The interim leadership team at Sage has announced some senior appointments at Sage Group PLC. They are the first since Stephen Kelly left the company in late August. The appointments include the announcement of Amanda Cusdin as Chief People Officer.

The press release leads with the appointment of Cusdin as CPO following an interim period. The previous CPO, Sandra Campopiano left the company in September 2017.  In a blog on the Sage People site earlier this year, Cusdin was referred to as the Sage CPO. Her Linkedin profile also indicates that she took up the role in October 2017. There is no mention of the word interim and one wonders whether this is more about making noise.

Cusdin was responsible for the roll out of Sage People across the organisation. She has also had a hand in the cultural changes that happened at the company under Kelly. As the company now goes through further transition it is a sensible appointment with the changes that are likely to happen over the next few months.

Cusdin commented: “I am looking forward to continuing to bring my experience to this exciting journey. As a CPO, I truly understand that success begins and ends with a company’s colleagues. Sage has done an incredible job of moving to a subscription-based business and I look forward to the next phase of transforming the colleague experience in helping to deliver the future success of the company.”

Cusdin’s appointment seems a well deserved reward for service, and should change little at Sage. The other appointments are more interesting.

Sage Intacct is poised to erupt on the international market. Will Reid suggest that Sage sunsets some of its other products, potentially both cloud and on-premises? This would simplify its portfolio. It is a strategy that Kelly seemed unwilling to take. However, Steve Murphy at Epicor has demonstrated it is a viable strategy for a legacy vendor.

Enterprise Times spoke to Reid following the acquisition by Sage and he indicated that he had a good relationship with Steve Hare, Interim COO/CFO at Sage as well as Kelly.  On the appointment of Reid and Robinson Hare commented: ”I’d like to also welcome Rob to the ExCo and Keith as Chief Strategy Officer who will both bring significant insights to business decision making.”

The Sage board has not yet appointed a new CEO. In our view these appointments, especially Reid’s, indicates that changes are happening under the interim guidance of Hare and the executive committee. Whether the new CEO will agree with the changes the team has made when he/she joins remains to be seen.

The appointment of Cusdin is a sensible one. The appointment of Reid to the executive committee is reward for the growth that the Sage Intacct has delivered since the acquisition. It is also an acknowledgement that Reid understands how to grow a SaaS business, something that Sage needs badly. He is an experienced executive and one wonders whether he is also a potential candidate for the CEO role.